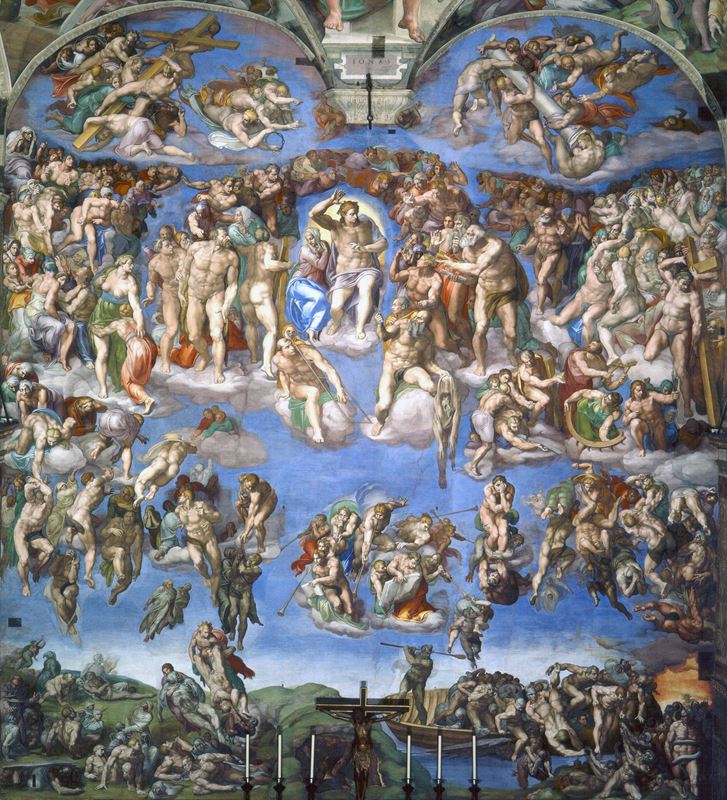 The Sistine Chapel in the Vatican was built by Pope Sixtus IV in the 1470s. The chapel was approximately forty meters by fourteen meters. In the chapel, six on both long walls; There were also two windows on the altar and entrance wall. Michelangelo was commissioned by Pope Julius II to make the ceiling frescoes of the chapel and completed this work, which took years, in 1512. Paulus III, who became pope in 1534, commissioned Michelangelo to paint the Last Judgment (Armageddon) themed painting on the altar wall of the chapel. For the arrangement, Michelangelo had canceled both of the windows in the roughly fourteen by twelve-meter altar wall. The Day of Judgment, which, according to the Christian beliefs, is thought to occur at the end of the world and that the Prophet Jesus will judge the living and the dead, was portrayed in a gigantic mural. He had started the Last Judgment scene in 1536 and completed it in 1541. This painting by Michelangelo, which depicted the apocalypse, contained approximately four hundred figures, usually over two meters in height. These figures covered the altar wall all along. The arrangement was designed as rectangular, four horizontal stripes separated by clouds.

There are two crescents in the first strip at the top. On this strip are groups of angels carrying items that symbolize what Jesus suffered. The angels in the peninsula on the left carry the cross and crown of thorns, while the other angels in the right peninsula carry the whipping column.

In the middle of the second strip just below the crescent moon, the Prophet Jesus is depicted in an imperious manner. As Jesus shines in his own light, to his right is his mother Meryem, slightly leaning against him. On both sides of Christ is the sacred community of Apostles, Saints, and Church Fathers. Below is Saint Lorenzo with his grid on his shoulder. Saint Bartolomeus is depicted holding the knife in his right hand and his own skin in his left hand (since he was killed by skinning). It is said that Michelangelo drew his own portrait on Bartolomeus' skin. In the middle of the cluster of people to the left of Christ, there is Saint Peter with his keys. In the cluster on the right of Jesus, right next to Mary, with his back turned and carrying the cross in his hand, St. Andrew is depicted. John the Baptist is to the left of St Andrew. Women are depicted on the left side of this horizontal section and men on the right.

In the middle of the third lane is a cluster of angels who resurrect the dead from their graves by blowing their thin long pipes. In the lower-left corner of this cluster, an angel is holding the notebook with the names of the heavenly ones, and in the lower right corner, two angels are holding the thick notebook with the names of the sinners. To the left of this horizontal section are the resurrected spirits that rise to the sky with the help of angels, either alone or with the help of wingless angels, and two spirits saved with the aid of a rosary towards the middle. On the right side of the horizontal section, sinners tumbling into the abyss of Hell are depicted.

On the fourth lane, on the left, are the dead from their graves, bodies waiting to be rescued or taken up by the angels. In the middle is a hole that can be interpreted as the mouth of hell or the entrance to demons. On the right, the hell boatman Kharon is depicted throwing those who fell into hell from his boat. In the bottom right corner, the figure wrapped in a snake is the Prince of Hell Minos. Because Michelangelo criticized this composition, Biago, in charge of the ritual, also illustrated Cesena.

The depictions of Michelangelo's body, which were considered extraordinary for that period, were reacted by both the church administration and other groups. Due to the rules imposed by the Trento Council (1545-1563), painter Daniele da Volterra would be assigned to dress the naked bodies of the sacred figures, and to fulfill this order, all the heroes would have to be covered with a cloth.