Letters from Van Gogh to Theo

Vincent van Gogh, who took the name of his brother who died before he was born, has experienced psychological problems in his inner world, his works have not gained value during his life, he struggled with economic difficulties. In such troubled situations, the only person who had tied him to live was his brother, Theo. The letters he wrote to his brother Theo over the course of seventeen years provide sections about Van Gogh's life and the paintings he produced. 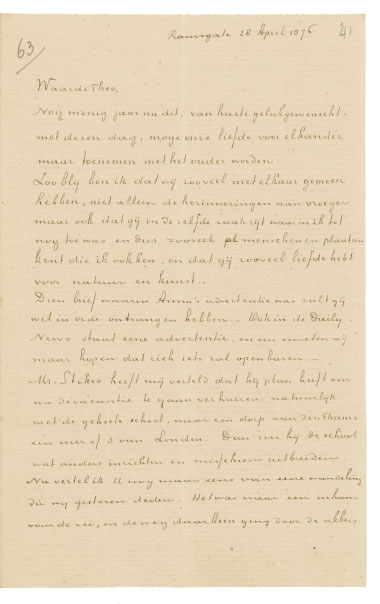 Many happy returns; my hearty congratulations on this day, may our love for one another only increase as we get older. I’m so happy that we have so much in common, not only memories of the past but also that you’re working for the same firm I worked for until now, and therefore know so many people and places that I know too, and that you love nature and art so much. You’ll have received that letter containing Anna’s advertisement in good order. There’s also an advertisement in the Daily News; now we can only hope that something will come of it. Mr. Stokes told me that he intends to move after the holidays with the whole school, naturally to a village on the Thames, around 3 hours from London. He would then furnish the school somewhat differently and perhaps expand it. Now let me tell you about a walk we took yesterday. It was to an inlet of the sea, and the road to it led through the fields of young wheat and along hedgerows of hawthorn... 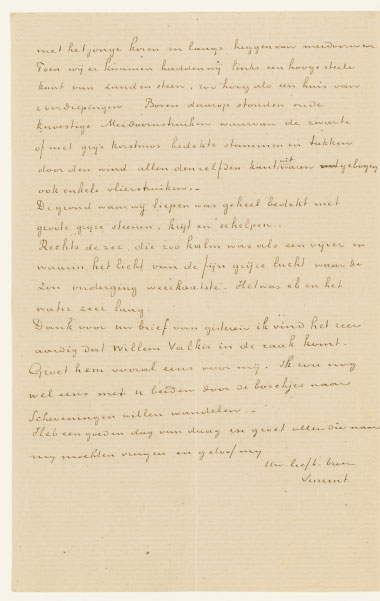 There’s something on my mind that I want to tell you. Perhaps you already know something about it, and what I’m telling you isn’t news. I wanted to tell you that this summer I’ve come to love Kee Vos so much that I could find no other words for it than ‘it’s just as if Kee Vos were the closest person to me and I the closest person to Kee Vos’. And I said these words to her. But when I told her this, she replied that her past and her future were all one to her and so she could never return my feelings. Then I was in an awful dilemma about what to do, to resign myself to that no, nay, never, or not yet to regard the matter as over and done with, and to take courage and not give up yet. I chose the latter. And until now I haven’t regretted that decision, even though I’m still confronted with that no, nay, never. Since then, of course, I’ve suffered a great many "Petites misères de la vie"***, which, if they were written down in a book, could perhaps serve to amuse some people, though they can hardly be considered pleasant if one experiences them oneself... 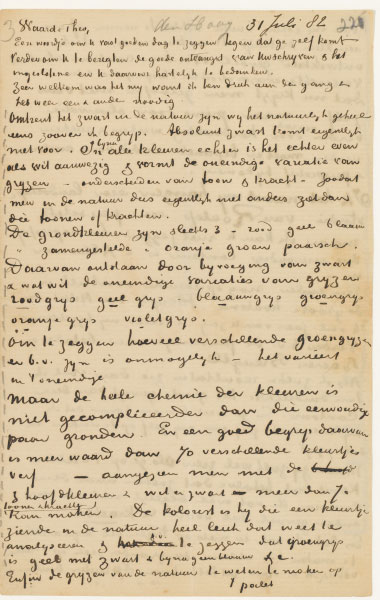 Just a word to say welcome before you come here. And to report the safe arrival of your letter and the enclosure, and to thank you very much. It was most welcome for I’m working hard and again need one or two things. As regards black in nature, we are of course in complete agreement, as I understand it. Absolute black doesn’t in fact occur. Like white, however, it’s present in almost every color and forms the endless variety of greys distinct in tone and strength. So that in nature one, in fact, sees nothing but these tones or strengths. The three fundamental colors are red, yellow, blue, "composite" orange, green, purple. From these are obtained the endless variations of grey by adding black and some white red-grey, yellow-grey, blue-grey, green-grey, orange-grey, violet-grey. It’s impossible to say how many different green-greys there are for example the variation is infinite. But the whole chemistry of colors is no more complicated than those simple few fundamentals. And a good understanding of them is worth more than 70 different shades of paint given that more than 70 tones and strengths can be made with the three primary colors and white and black. The colorist is he who on seeing color in nature is able to analyze it coolly and say, for example, that green-grey is yellow with black and almost no blue, &c. In short, knowing how to make up the greys of nature on the palette. To make notes out of doors, however, or make a small scratch, a highly developed feeling for the outline is absolutely essential, as it is for working it up later... 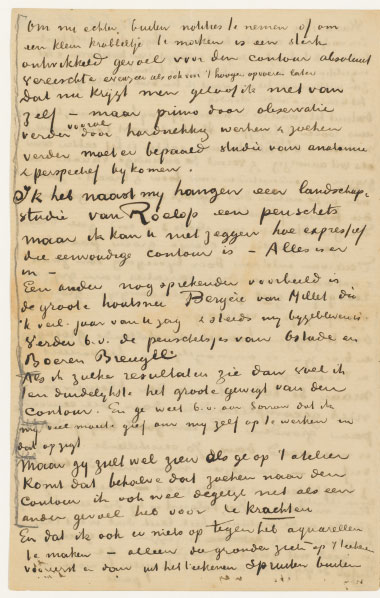 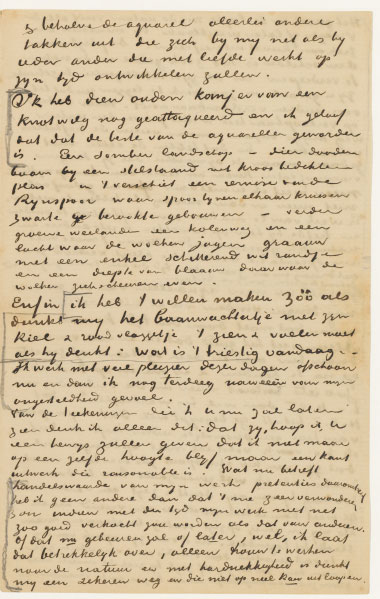 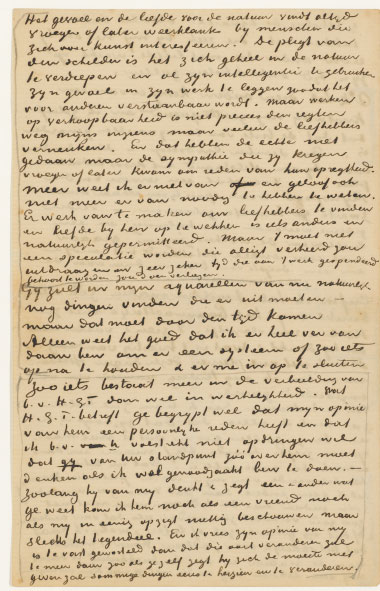 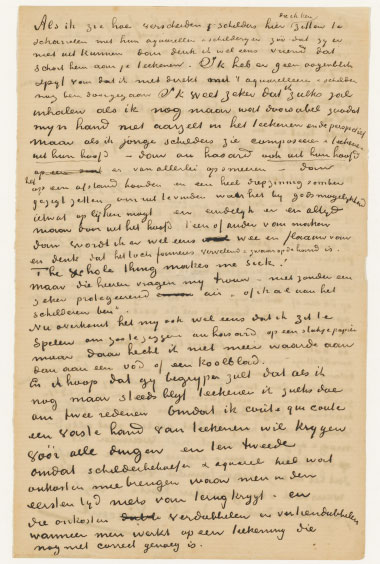 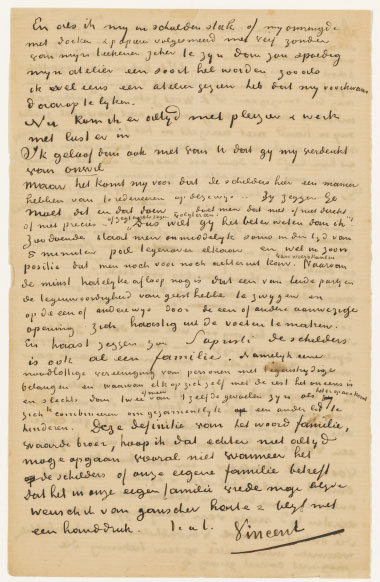 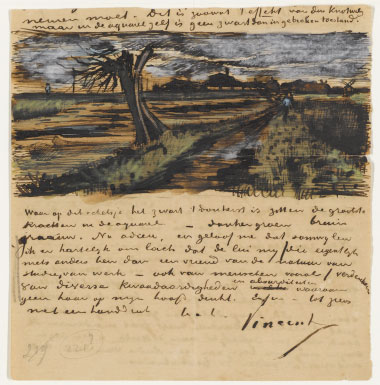 Thank you a thousand times for your kind letter and the 300 francs it contained after some weeks of worries I’ve just had a much better one. And just as worries don’t come singly, nor do joys, either. Because actually, always bowed down under this money problem with lodging-house keepers, I put up with it cheerfully. I’d given a piece of my mind to the said lodging-house keeper, who isn’t a bad man after all, and I’d told him that to get my own back on him for having paid him so much money for nothing, I’d paint his whole filthy old place as a way of getting my money back. Well, to the great delight of the lodging-house keeper, the postman whom I’ve already painted, the prowling night-visitors and myself, for nights I stayed up to paint, going to bed during the day. It often seems to me that the night is much more alive and richly colored than the day. Now as for recovering the money paid to the landlord through my painting, I’m not making a point of it, because the painting is one of the ugliest I’ve done. ( Night Coffee) It’s the equivalent, though different, of the potato eaters...

At last, I’m sending you a little croquis to give you at least an idea of the direction the work is taking. Because today I’ve gone back to it. My eyes are still tired, but anyway I had a new idea in mind, and here’s the croquis of it. No. 30 canvas once again. his time it’s simply my bedroom, but the color has to do the job here, and through its being simplified by giving a grander style to things, to be suggestive here of rest or of sleep in general. In short, looking at the painting should rest the mind, or rather, the imagination. The walls are of pale violet. The floor is of red tiles. The bedstead and the chairs are fresh butter yellow. The sheet and the pillows very bright lemon green. The blanket scarlet red. The window green. The dressing table orange, the basin blue. The doors lilac. And that’s all nothing in this bedroom, with its shutters closed. The solidity of the furniture should also now express unshakeable repose. Portraits on the wall, and a mirror and a hand-towel and some clothes. The frame as there’s no white in the painting will be white. This to take my revenge for the enforced rest that I was obliged to take. I’ll work on it again all day tomorrow, but you can see how simple the idea is. The shadows and cast shadows are removed; it’s colored in flat, plain tints like Japanese prints. It will contrast, for example, with the Tarascon diligence and the night café...

A few words to wish you and your fiancée much happiness these days. It’s like a nervous tic with me that on the occasion of a day of celebration I generally experience difficulties in formulating a congratulation, but it shouldn’t be concluded from that that I desire your happiness less ardently than anyone else, as you well know. I still have to thank you for your last letter, as well as for the consignment of colors from Tasset and several issues of Le Fifre with drawings by Forain. The latter has often had the effect on me that what I manufacture becomes very sentimental in comparison. I waited a few days before replying, not knowing which day you would leave for Amsterdam, besides I also don’t know whether it’s in Breda or Amsterdam that you’ll be getting married. But if, as I’m led to believe, it will be in Amsterdam, then I presumed that you would find this letter there around Sunday. By the way just today friend Roulin came to see me he told me to give you his warm regards and to congratulate you. His visit gave me considerable pleasure, he often has to carry burdens which one would say were too heavy. As he has a strong peasant nature, that doesn’t prevent him from always looking well and even joyful however for me, who am always learning something new from him, what lessons for the future there are in his conversation when he seems to say that the road doesn’t become easier as one advance in life....