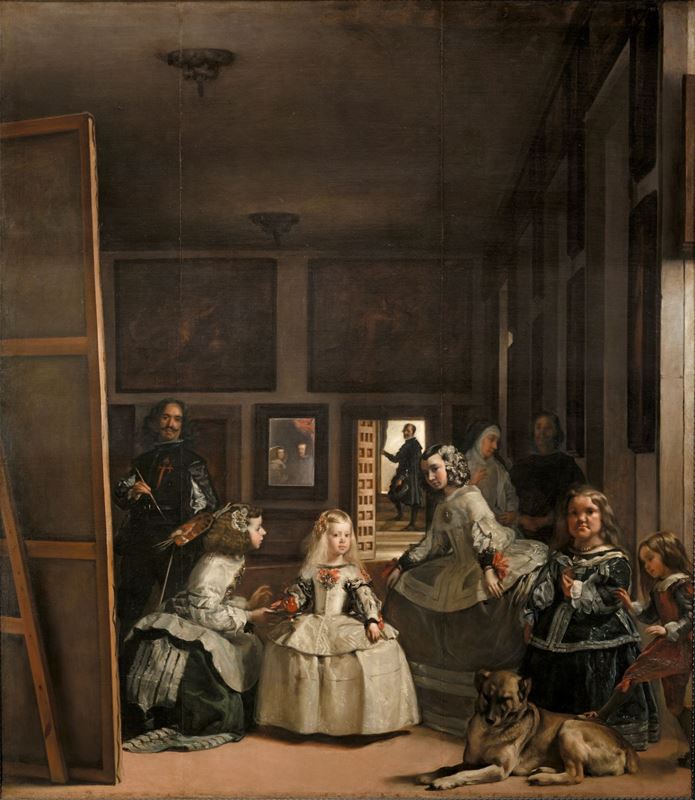 Diego Velázquez's painting in 1656, "Las Meninas" is one of the most enigma paintings in the history of art. Las Meninas has been reconsidered and interpreted in countless ways. In this picture he depicts a scene in which Velázquez included himself. This unusual painting provides a glimpse of the noble life behind the scene.

Las Meninas is pictured in a room with a high ceiling in the Alcázar Palace of the Spanish King IV. Felipe. Table shows this room used by Velázquez as a workshop. Identities of the persons depicted in the table are identified. The girl standing in the middle of the canvas is Infanta Margaret Theresa. Infanta Margarita was born in 1651 from his second marriage with Mariana, King of Spain IV. Felipe , in 1649. She is the only child of the queen when painting is done. In the table, the Spanish Princess appears to be surrounded by the daily rush of the palace people and servants, including the artist. The other figures are neatly placed around it. Five-year-old Infanta's bridesmaids stand on both sides of the paint. From the bridesmaids, Doña María Agustina Sarmiento kneeled to the bottom of Infanta's feet. He extends the water to the princess in his little red test. The other bridesmaid, Doña Isabel de Velasco, stands behind the princess. The bridesmaid standing behind the princess seems to be doing a bow. On the front is the female dwarf Mari-Bárbola, standing to the right of the painting, and the male dwarf Nicolasico Pertusato, who the dog nudges to nod off who is napping on the floor. There is a man in the shadows, called "guardadamas", who is the protection of noble women. Next to him the Doña Marcela de Ulloa, the chambermaid. In the background, the person standing in the light door at the head of a few steps leading to another room is Don José Nieto, the queen's private minister of. While the escape point of the perspective is above this figure, the focal point of the painting is Infanta Margaret. The picture depicts the Spanish Princess, illuminated by the strongest light, in a manner that shows that he is aware of his status. The light is especially reflected on Infanta's face and dress. The dark background has been successful in highlighting his light hair and dress.

Velázquez has depicted himself in the Nedimler while working on a large canvas. With his palette and brush in hand he is standing in front of a giant canvas where we can only see the back. He is pulled backwards from the canvas and looks at those who pose to his. When the faces of the figures are examined, it is noticed that the princess and the others are looking here. At the back of the workshop there is a large mirror (thought to be a canvas) in the dark frame. The image in the mirror reflects the figures of the king and queen who are posing for their portraits under a red curtain and watching the scene. Therefore, the viewer can see a group of people who come to visit the workshop in the view of the king and the queen.

In 1434 Velázquez was inspired by Jan van Eyck's method of reflecting the unseen in the room in the mirror , inspired by the painting "The Marriage of Giovanni Arnolfini" in the collection of the King of Spain. The red cross in the chest of the painter figure, depicted by Velázquez himself, is a symbol of the knights of Santiago and states that Velázquez is one of them. The red cross in 1696 "Las Meninas" was added to the canvas. Velázquez received his knighthood title in 1659. Some sources suggest that the cross was added to the picture by IV. Felipe when Velázquez was on his deathbed. But after Velázquez has been declared a knight, he is more likely to have added it.

Large sized tables are hung on the rear wall of the room depicted in the picture. Two of these are copies of "Peter Paul Rubens," made by the son-in-law of Velázquez. In this table, color and light games are emphasized rather than shapes. Velázquez created a realistic sense of illusion and perception by using light and shade in accordance with the baroque style. The artist created his painting by using black, silver, pale rose, coral red, and red colors. Along the entire surface of the painting, the red water jug which was presented to the princess, the male dwarf dressed in red clothing, and the reflections of the king and queen standing under a red curtain, as well as a red cross on Velázquez's chest, the painter used to paint his red touches.

It has long been believed that Velázquez, the ancestor of the Impressionists, created his paintings without any sending, and that, like a daily photograph, he made a passing moment into a permanent form. It is thought that Velázquez managed to stop a true moment long before the camera was found. According to this assumption, the subject of this painting is an ordinary scene of palace life. In front of the picture in which the reality and the illusion are intertwined, the spectator finds himself in 1656, in the presence of the king and queen whose reflections are reflected in the mirror, and perhaps in the place of the king and queen.