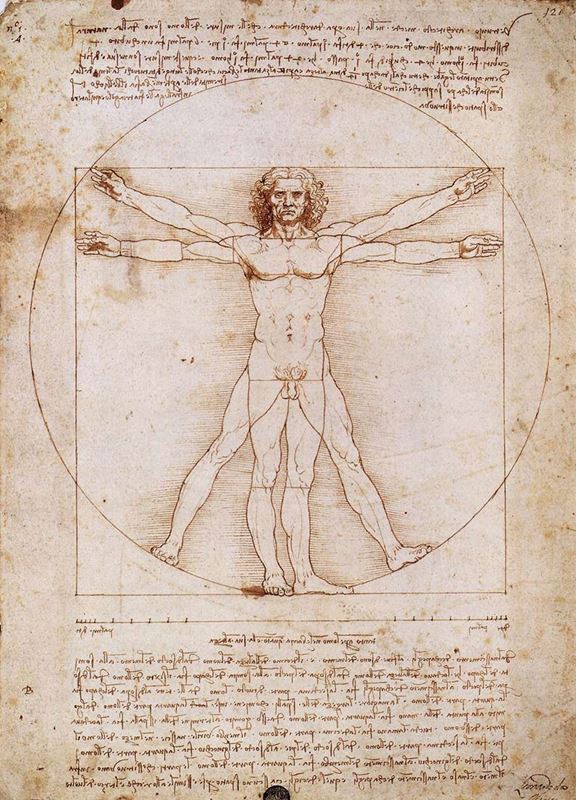 Leonardo da Vinci first began to work extensively on the proportions of the human body, anatomy and physiology in the late 1480s. In 1489 he began the preparation of a book titled "On the Human Figure". He could not finish the book, but he had made several drawings for this project. He began to examine the proportions of seated and kneeling bodies. He compared the results of his studies with the ratio-ratio theory of Vitruvius, one of the most important thinkers.

Marcus Vitruvius Pollio, an architect, engineer and thinker who lived in the Roman Empire, wrote a series of books on architecture. The third book of the series contained complete measurements of the human body.

The measurements of Vitruvius were described many times after the Renaissance. But the most well-known of these paintings was Leonardo's.

The drawing, made with ink on a large sheet of paper, depicted a single person in two different positions. Above and below the drawing were the following texts written by Leonardo:

"Vetruvio, architect, puts in his work on architecture that the measurements of man are in nature distributed in this manner, that is: Four fingers make a palm, four palms make a foot, six palms make a cubit. Four cubits make a man's height. Four cubits is make a pace and 24 palms make a man and these measurements are in his buildings". "If you open your legs enough that your head is lowered by one-fourteenth of your height and raise your hands enough that your extended fingers touch the line of the top of your head, know that the centre of the extended limbs will be the navel, and the space between the legs will be an equilateral triangle."

"The length of the outspread arms is equal to the height of a man."

From above the chest to the top of the head is one-sixth of the height of a man.