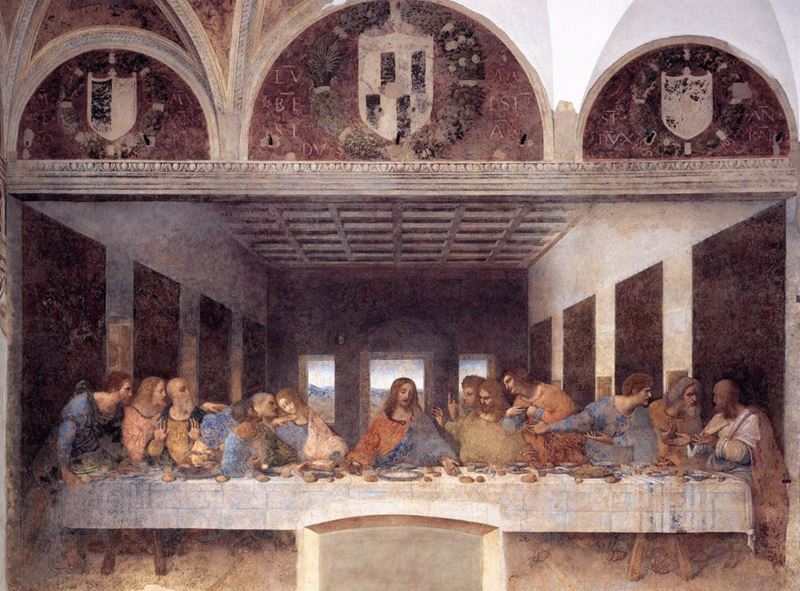 "On the first day of the Festival of Unleavened Bread, the disciples came to Jesus and asked, “Where do you want us to make preparations for you to eat the Passover?” He replied, “Go into the city to a certain man and tell him, ‘The Teacher says: My appointed time is near. I am going to celebrate the Passover with my disciples at your house." So the disciples did as Jesus had directed them and prepared the Passover.

When evening came, Jesus was reclining at the table with the Twelve. And while they were eating, he said, “Truly I tell you, one of you will betray me.” They were very sad and began to say to him one after the other, “Surely you don’t mean me, Lord?” Jesus replied, “The one who has dipped his hand into the bowl with me will betray me. The Son of Man will go just as it is written about him. But woe to that man who betrays the Son of Man! It would be better for him if he had not been born.” Then Judas, the one who would betray him, said, “Surely you don’t mean me, Rabbi?” Jesus answered, “You have said so.”.

While they were eating, Jesus took bread, and when he had given thanks, he broke it and gave it to his disciples, saying, “Take and eat; this is my body.” Then he took a cup, and when he had given thanks, he gave it to them, saying, “Drink from it, all of you. This is my blood of the[a] covenant, which is poured out for many for the forgiveness of sins." ( Matthew 26:17-28)

"The Last Supper" is one of the most important events about the life of Jesus in the Bible. It was the last meal he had with his apostles before Jesus was arrested and crucified. It was also the evening when the Eucharist, Jesus' blood, was the representation of the wine of his body with bread.

The "Last Supper" theme was handled by many artists before Leonardo. In the traditional depictions, while Jesus calmly shared the holy bread, all the apostles, except Judas, would be sat side by side at the table. In order to clarify the identity of Judas Iscariot, painters resorted to various methods. Other artists often describe Judas as devoid of a guild defining sacred figures. In the paintings they made, Judah was portrayed in separate ways, sitting on the other side of the table, standing or with his back facing the viewer. Judas was depicted in isolation from the eleven apostles of Jesus. Leonardo 's Last Supper was quite different from these versions. There were movement and excitement in Leonardo's Last Supper. Leonardo, each figure was carefully calculated by scrutinizing. He was vivacious in the way his figures were equipped with movements and emotions on their faces. Leonardo put forward a masterpiece in terms of stage design and the clarification of Judah's identity.

Leonardo concentrates on what is described in the holy book and what Jesus calls his disciples "And while they were eating, he said, “Truly I tell you, one of you will betray me" (Matthew 26:21)". The painter, Jesus's has chosen this dramatic moment when one of his disciples explained his betrayal. In his wall painting, Leonardo describes his disciples in a puzzled manner and in a manner that asks the traitor. The magic of life in this scene is precisely these mutual questions and signs.

In the center of a long dining table, the apostles, in groups of three, are depicted on the right and left the side of Jesus. Each group is characterized by distinctive gestures and mimic. Jesus has just said the words of the wager that will confuse the apostles. In almost all the apostles' reactions, fear and confusion can be seen easily after the betrayal is revealed.

In the scene depicted in the picture, the Bartholomew at the left end of the table was standing up from the chair in excitement. Next to him, James Minor and Andrew lift their hands up in surprise. Peter, the hastiest, tries to get up and inevitably pushes Judah up on the table. Judas leaning against the table, who will perform the betrayal of Jesus. The left hand of Judah extended to the bread on the table. Judah's right hand is depicted as a figure that suppresses the money bag, the symbol of treason, on his chest. In the other "Last Supper" versions, Judas was portrayed at the other end of the table or facing back to the viewer. For the first time, Judah was depicted among the other apostles.

Leonardo has masterfully portrayed Judas among the twelve apostles but separated him from those figures. Leonardo made it more visible by portraying Judah as he retreated with fear. Judah clasped his hands silently, bowed his head in deep thoughts, sitting next to John. On the left side of Jesus are two other groups of apostles. This group of apostles, like the other groups, consists of three gathered apostles. After Jesus' betrayal, Tomas, who was in the first group, spread his hands to his side and looked around with suspicion. James Major is looking towards Jesus with fear and surprise. In the group, Philip is standing and showing itself as "Will I betray the Lord?". The last group to the left of Jesus in Matthew, Thaddeus, and Simon. Matthew, Thaddeus, and Simon raised their hands to ask questions, waiting for an explanation from Jesus.

In the center of the image, Jesus was brought to the fore as if he was blessed with the light filtered through the window on the back. Jesus is at the center of the perspective. In spite of the mobility of the excited apostles, Jesus extended his hands over the table in stillness. Jesus' head leaning forward, he is in deep sorrow with his hopeless hands on the table. Eucharist is also depicted in the picture. Jesus's hand with bread shows a glass of wine with the other hand.

There were three arches in the upper part of the refectory wall where the painting was located. The apostle groups at both ends of the table are located in the small two arches on the sides, the two inner groups and the Jesus are under the middle arch. "Crests of the Sforza Family", which are surrounded by ornaments, are exhibited in the belt mirrors. The arches of the Sforza family, surrounded by ornaments, are exhibited in the arch mirrors. The emblem of Ludovico Sforza and his wife Beatrice d’Este is in the middle. To the left and to the right of Ludovico are the crests of his sons Massimiliano and Francesco.

"The Last Supper" was the result of Leonardo's long-running attempts on gestures and gestures and the search for new methods of expression. It has been recognized all over the world with countless copies, remakes, and illustrations.