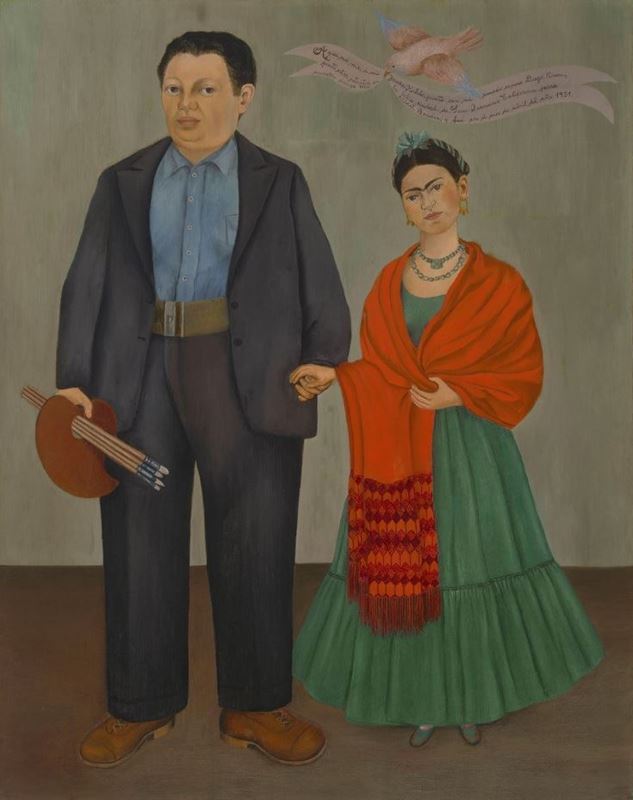 It was a very fast process for Diego Rivera and Frida Kahlo to meet and get married. Both painters were among the greatest artists of the time.

Her mother, who could not accept this relationship, would leave Frida and her father alone at the wedding on August 21, 1929.

I fell in love with Diego, but my family didn't like it, because Diego was a communist and ours compared him to fat or fat Brueghel. They said it resembled the marriage of a white dove with an elephant…

My father said to Diego: “Remember that my daughter is sick and will have health problems throughout her life. It is smart but not beautiful. Keep this in mind. Despite everything, if you want to marry her, I give her consent. ” Only my father came to my wedding. Nobody else came from my father.

Frida would wear the Mexican traditional dress Tehuana for Diego after the wedding. Her marriage was both a beginning to a new life, both as a woman and as a painter. Frida's life and art would be intertwined from now on. She was the wife of a sensational famous painter and was trying to flourish for Diego. While he was organizing Diego's daily life, he was taking small steps on the path of a painting by feeding on his energy and dignity.

Frida portrays himself as holding hands with her husband in his painting. Frida described himself as small. Diego is like a giant. In the picture, Frida and Diego are standing. While Diego is portrayed as a great artist with his palette and brushes in his hands, Frida is also his favorite role as his wife, who loves genius. His head is leaning towards the giant next to him as if showing his love.

Diego stands firmly on the ground with his big feet. Frida's feet are almost invisible. Despite all that fragility in Frida's Posture, her gaze gives the impression of a confident and brave woman. This young woman presents her husband to the world.

In the picture, Diego's oblique head towards his shoulder is not facing towards Frida. Diego's head is slightly turned in the other direction, and his arms are swinging at the sides of his body. Frida's arms are shown extending towards Diego. The couple's hands are in the middle of the canvas to show the importance Frida gives to the marriage bond.

Apart from Frida, Diego has many indispensable fields of interest for him. "Frida and Diego Rivera" is the picture of Diego's impulsiveness to this hand, whose primary passion is art. Diego's commitment to beauty, Mexico, Marxism, the people, women, plants and the world precedes Frida. "Frida and Diego Rivera" painting is an expression of Frida's awareness of Diego's passions.

There is a note on the ribbon pictured in the background on the canvas:

“You see us here, I'm Frida Kahlo and my dear wife Diego Rivera. I made these portraits for our friend Albert Bender in April 1931 in California's beautiful city of San Francisco. ”