Accident and After - Frida Kahlo 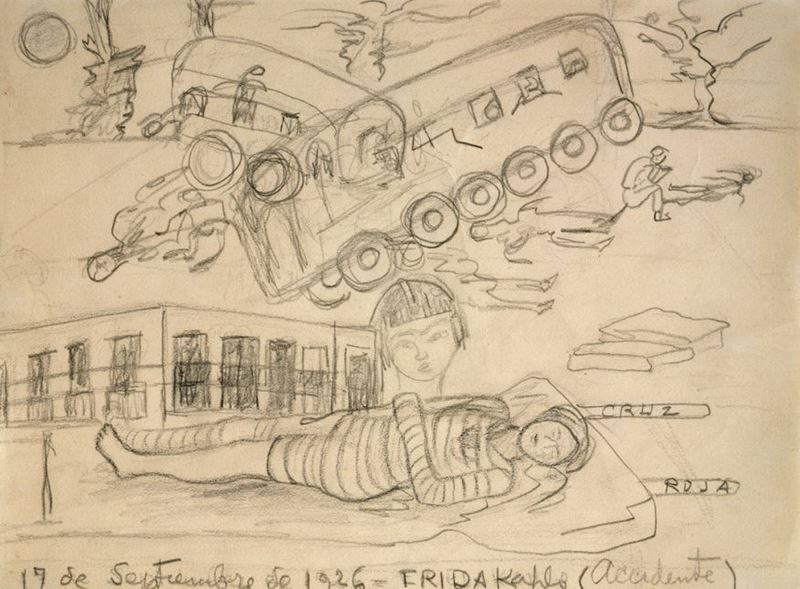 Frida Kahlo at the age of eighteen was in a traffic accident that would be the turning point for her.

On the afternoon of September 17, 1925, Frida boarded one of the city buses with her lover Alejandro Gómez Arias. A tram from Xochimilco hit this bus to Coyoacán right in the middle. The result of the accident, which killed so many people, would be very severe for Frida.

“The buses of my youth were not reliable at all. They had just begun to use and were very popular. The trams were empty. I took the bus with my boyfriend Alejandro Gómez Arias. The bus had an accident. The bus collided with the train of the Xochimilo line. The collision was not violent. It was a heavy and slow collision. We took another bus first. But we got off the bus looking for my little umbrella I forgot. We got on that second bus that would make me miserable. The accident happened at an intersection…

A lie in which one is aware of the collision. It's a lie that people cry after an accident. I had no tears. The crash threw us forward. One of the balustrades pierced me. It was like a sword piercing the bull. A man saw that I was badly injured and had a heavy bleeding. He carried me. He put me on a pool table until the Red Cross came."

Alejandro Gómez Arias would describe the accident as follows:

“The tram with two wagons approached the bus slowly. Slammed into the middle of the vehicle. The bus had a strange flexibility. The bus was twisted and didn't break for a while. A bus with long rows on both sides. I remember my knees touching the person sitting in front of me for a moment, I was sitting next to Frida. As soon as the bus reached its maximum flexibility, it cracked into thousands of pieces and the tram continued to crush a lot of people.

I was stuck under the wagon. One of the iron bars that broke off the wagon was stuck in Frida like a knife. The iron bar that entered Frida's hip had entered on one side and exited the other side. When I managed to get up, I came out from under the wagon. I didn't have any problems except for my minor wounds. Naturally, the first thing I did was call Frida.

Something strange had happened. Frida was completely naked. Because of the collision, the tram stripped Frida's clothes away. One of the passengers on the bus was probably a painter. The painter was carrying a packet of gilding powder. This package was opened, and the powder in it was poured into Frida's bleeding body. When people saw her, they shouted, 'La bailarina, la bailarina!' People thought Frida was a dancer because of the gilding on her red, bloody body.

When I lifted him off the ground, I noticed that Frida had a piece of iron stuck in his body. One guy said, 'we need to remove the piece of iron'. He put his knee on Frida's body. The man said, 'Let's take it out.' Frida screamed very high when the man pulled the piece of iron. Frida's scream had suppressed the siren of the Red Cross ambulance. Before the ambulance arrived, I carried Frida to a pool hall. I took my coat off and covered it. I thought he was gonna die. Yes, there were two or three deaths after the accident.

The ambulance arrived and took Frida to the Red Cross Hospital on San Jeronimo Street, a few blocks away. Frida's condition was so severe that the doctors thought he could not get up from the operating table.

It was the first time Frida had surgery. During the first month, it was not clear whether he would survive."

Frida was immediately taken to the operating room at the Red Cross Hospital. Frida's condition was very bad. Frida's had fractures on her collarbone, spine, hip and right leg. She had dislocation and crush on his right foot and dislocation on his left shoulder. The deep wound caused by the metal bar entering Frida's left buttock and coming out of her vagina was painful evidence that she had survived the accident cheaply.

On October 17, Frida was taken out of hospital one month after the accident. Frida had to wear a plaster corset for nine months. She was going to be bedridden for at least two months.

Frida spent a long period of treatment without moving in plaster corsets. Although he recovered in three months, her pain increased again one year after the accident. Three dislocated vertebrae again sentenced him to plaster corsets and a special device was attached to his right foot.

His family designed a bed for Frida. This columnar bed with its mirror on the ceiling would be a turning point in Frida's life. He started painting with the help of a mirror. The painting was a remedy for Frida's pain.

1927’de In 1927, Frida was a little healed. His aim was to study medicine. Although Frida was unable to attend her classes effectively, she was among her fellow students.

In 1929, he married Diego Rivera, one of Mexico's most famous painters. Although she had three pregnancies, her body would not allow her to give birth due to health problems. Frida would live with a longing for children.

Frida drew the incident on October 17, 1926, a year after the accident. There were two colliding vehicles in Frida's picture. Wounded scattered on the ground, the house of Coyoacán was located. Frida pictured himself in two places. One of the two Frida pictured was lying on a stretcher wrapped in bandages and plaster. The other Frida was portrayed as the head of a child staring with her big eyes.

Frida couldn't paint this accident. Years later, she said that he intended to, but could not, because this accident was too complex and important for him to be reduced to one understandable image.

She would live on alert against the disease for nearly thirty years from the accident to his death. She spent his life with hospitals and doctors. She would have had to wear more than twenty corsets.

Frida had to live with uninterrupted pain in her spine and right leg during her lifetime. She would have had more than thirty surgeries due to his illnesses. She suffered polio at the age of six and her right leg was disabled. In 1954, Frida's leg was cut off due to gangrene in her right leg. Despite all these drawbacks, Frida would continue to paint on the wheelchair and in her bed.

Frida Kahlo responded to all his illnesses and negativity through his paintings with the ambition and desire to work. Her unfortunate fortune had supported him to become a great artist. This accident was a twist of fate for him…