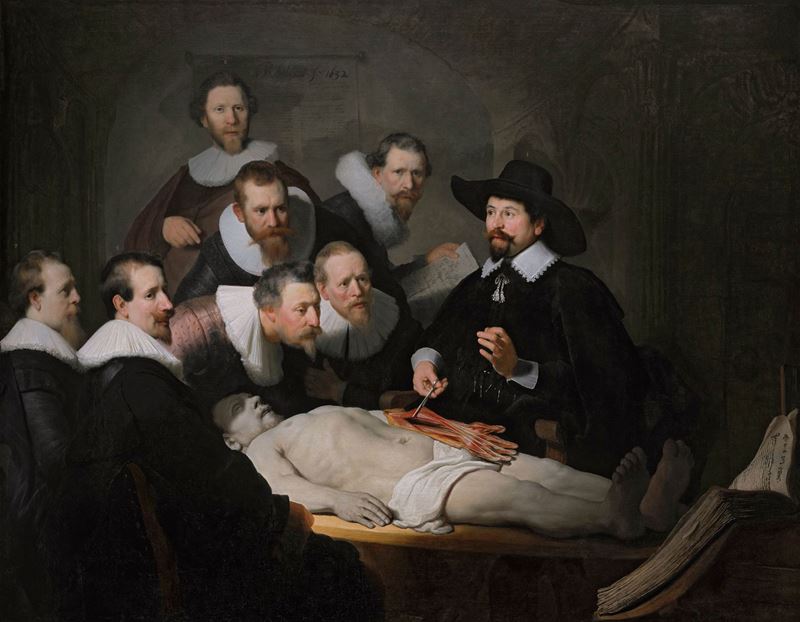 Rembrandt van Rijn's is one of the most important work in 1632 to "Dr. Tulp's Anatomy Lesson" table. This work by the Amsterdam Surgeons' Guild was one of the first important orders in Amsterdam. As the first group portrait of Rembrandt, "Dr. Tulp's Anatomy Lesson" table is shown. The table in the form of a general group portrait gave Rembrandt a great success.

Rembrandt, lecturer Dr. Nicolaes Tulp described in an anatomy class surrounded by colleagues. The basic figure of the painting is Dr. Tulp in his lecture, the seven members of the Amsterdam Surgeons Guild watch him with great care and interest.

Dr. Tulp is wearing a wide-brimmed hat, which is also a sign of the top position of the unit. It is not only a surgeon, but also a leading member of the city council. He is known as the initiator of modern anatomy studies in Amsterdam. Some of them offer anatomy lessons, which can be organized as public demonstrations, which can also be ticketed. Demonstrations, called The Anatomy Theatre, that can be seated around the oval shaped were held in an "amphitheater". The cadaveric examinations which were banned before the reign of Rembrandt were restricted to the cadavers of the criminals during his reign. The anatomy lesson described in the picture lasted three days in January 1932. The cadaver in the picture is Adriaen Adriaansz, who was executed in the winter of 1632 for the crime of coat theft.

The scene in the picture is very lively. The figures are depicted in pyramidal form and as a diagonal insertion. Dr. In Tulp class, he uses both practical and theoretical explanations. With his right hand and fingers, he shows the cadaver's muscles and wrist movements, while his left hand and fingers point to the application. Seven members of the Surgeons' Guild, who are observing pure attention, focus on cadavers, the book and Tulp's hands. The position and expression of each figure is different. Only one looks at the audience. The names of the participants are written on the paper. In this respect, the painting is a historical document.

In the lower right part of the picture, at the foot end of the cadaver there is an anatomy book which is open where at least one of the members is looking. This is the revolutionary anatomy book of the sixteenth-century anatomist Andreas Vesalius called "De Humani Corporis Fabrica" (1543). As an artistic work for the first time in the table, apart from the works of Anatomist Vesalius, the dissection on the body was first described as an artistic work.

The skin of the corpse and the pale faces of the figures contrast with a darker background. The background is neatly and gently designed to create an atmosphere effectively and avoid distractions. Another remarkable point in the table is that during the autopsy, light does not spread from outside to the body, but from the body to the outside. Adrianson's body is in focus and is the source of light.

It was noteworthy that the head of the cadaver was not at the center of the body and to the right on the chest, and the neck was not seen. As a result of the execution of Adrianson broken neck is not seen in the picture. Rembrandt, is told that he did not depict the fractured neck in order not to divide the main idea of the paint.

Rembrandt's not use of skeleton cadavers in his study of anatomy was his most distinctive trait. Rembrandt's "Dr.Nicolaes Tulp's Anatomy Lesson" table before the skeleton was used in all the anatomy lessons. Thus Rembrant had created a separate style and form that turned a deep-rooted tradition. After this painting, the cadavers would no longer be portrayed as skeletons.