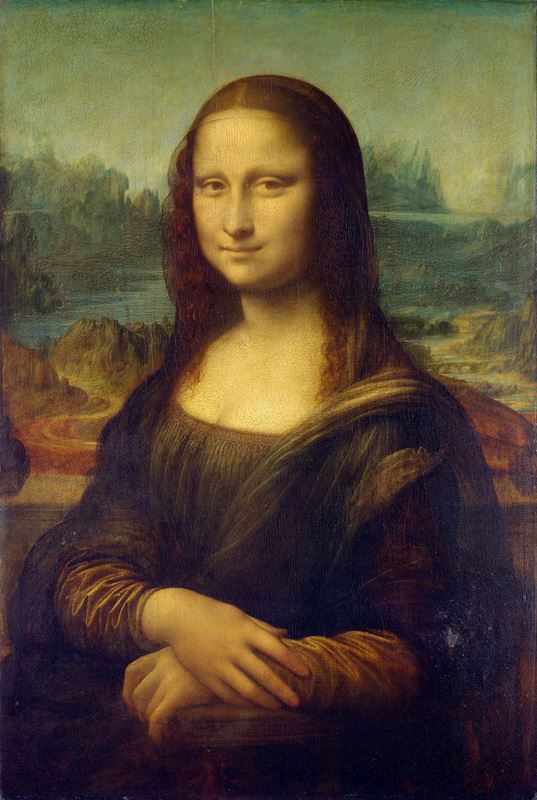 Mona Lisa is the most famous painting by Leonardo da Vinci and perhaps the most famous artwork in the world. Besides the art enthusiasts who see the original in the museum, there are very few people who do not see their reproductions in books, postcards, advertisements or T-shirts related to Mona Lisa. The Mona Lisa painting has inspired artists and writers for generations and has been replicated numerous times. Many articles have been written about Mona Lisa and it has been one of the most variation paintings by other artists.

Various views have been made about the woman in the portrait, one of the most famous faces in the world. The name used today is based on Giorgio Vasari, a 16th-century art historian. Leonardo, According to Giorgio Vasari, the Florentine merchant Francesco del Giocondo depicts his wife. Born in 1479, Lisa married Francesco del Giocondo, 16 years old. When Leonardo was in Florence in 1503, Giocondo, a wealthy silk merchant, visited Leonardo and asked him to portray his wife, Lisa del Giocondo. On the same date, he ordered an order to celebrate a house brought to the house by Lisa and his son. At that time in Florence, they were seen as sufficient reasons to order a portrait.

The most impressive thing in the table is the vitality in Lisa. The woman in the painting changes in front of our eyes as if she was a living being; every time we look at her, she looks different. Lisa is smiling and has a serious and distant expression. His statement does not give himself up and varies according to his point of view. Leonardo deliberately blurred the mouth and eye edges of the portrait to create this effect. He used a technique called sfumato. In particular, Leonardo Mona Lisa has left these points on the face unclear with a soft touch. Leonardo applied the sfumato method to the picture with great care. This method in the table is subtle and difficult to notice. For this reason, it is unclear what kind of a soul Mona Lisa is. The expression on your face seems to change every time. In addition to uncertainty, there are other factors that create this effect. The two halves of the table are not symmetrical to each other. This situation, notably in view of nature in the background of the picture are resected. The horizon line on the left is lower than the right. Therefore, when he focuses on the left side of the painting, the woman looks taller and upright. The face of the woman changes according to the direction we focus on because the sides of her face are not the same.

At first glance, the composition looks simple and simple. The woman sits in a chair with armrests in front of a vast view. Unlike other portraits of the period, only the face and shoulders are not depicted. Her entire posture was revealed. The woman sits steeply and laterally, relying on the arm of the chair. Mona Lisa's face is facing to our side, her body sideways. A vivid effect was thus created. In the painting, behind the woman is seen guardrail of a lodge. The two columns of the lodge have disappeared from the edges of the painting over time. The front section of the painting is connected to the scenic back section by this columned railing. At the rear, a path is selected to the left of the image, and on the right is an extension resembling a dried river bed. This extension, which resembles a river bed, is thought to be Buriano Bridge near Arezzo. The steep mountains depicting the landscape lacking vegetation are away and under the greenish-bluish sky.

In this portrait, Leonardo 's mastery came to the fore with his meticulous attention to detail. The table covers the woman's dangling hair with a thin tulle. Leonardo 's attention to detail is noticeable in the fine embroidery on the dress. The collar of her dark-colored dress is well below the woman's neck. There is embroidered embroidery on the collar. The garment's collar is shirred. Mustard colored cuffs in the arms of the woman and heavy-looking fabric emits a natural glow. Shading, especially on the face and hands, was used to create a three-dimensional effect. The model does not have eyebrows and eyelashes, but the screening studies have previously indicated their presence in the portrait. The pigment that Leonardo uses for these details is thought to have faded over time or erased during cleaning. The absence of eyebrows gave an abstract expression to the face. The superimposed hands complete the composition and create a calm, dignified person in the picture. This posture reflects a courtesy rule for that period.

Before Leonardo was completed his portrait, Florentine had a big impact on his understanding of portraiture. During the same period, young Raffaello, who was in Florence, frequently visited Leonardo's atelier. Raffaello had immediately adopted the technique of his portraits of Leonardo. Based on Mona Lisa, she has created a concept of portraiture that will remain valid for many years. Raffaello has produced works with this new approach to Florentine customers. Raffaello portrays "Portrait of Maddalena Doni" and "Young Woman with Unicorn" portraits showing the same posture in Mona Lisa painting. Raffaello continued the new understanding that shone with Leonardo's Mona Lisa.

For years working on Mona Lisa, Leonardo has created one of the greatest masterpieces in art history. He didn't hand it over to his official client and always stayed with him. Although Leonardo presented the painting to the official king, he was finally given the museum in Paris. The painting was stolen by the museum employee, Vincenzo Peruggia, who wanted to take him back to Italy when he was exhibited in Louvre in 1911, and strangely appeared in Florence in 1913. The story of the robbery and find of the painting was discussed very much. The story of this robbery and find carried the official headlines all over the world. The fame of the painting has increased. The table, which is returned to Paris, visited by millions of people every year, is exhibited behind the bulletproof glass as the biggest masterpiece of the Louvre Museum.