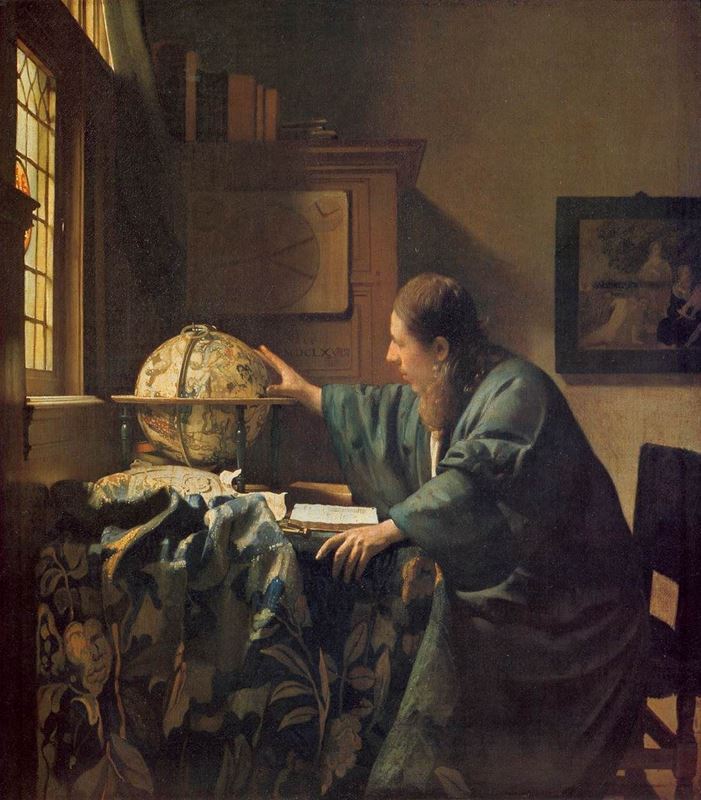 "The Astronomer" table of Vermeer, another table, had many similar elements with "The Geographer". These two tables, which are reminiscent of each other in terms of general appearance, have only illustrated the same room by changing the details. In both works, two scientists and two research activities were seen. In the 17th century, where important scientific discoveries took place, the discoveries of sea explorations and astronomers emerged. Accordingly, the theme of the research that makes the research was frequently processed in paintings and engravings. Among the painters of the Delft painters, there were often scientists among the themes of painting.

The scene was illuminated by a small square window on the left. In the middle of the window, partly visible, the homes of Delft-specific descriptions of the stained glass included. It was known that the sphere on the table was made by Jodocus Hondius, dating back to 1600 from the Mercator period. The figures on the sphere consisted of imaginary figures, constellations, and zodiac used since antiquity.

In the foreground was a green and blue embroidered cover hanging from the table. The curves of the cover covered most of the surface of the painting in Vermeer's paintings as it allowed the artist to reflect the shadow and create the light. In this picture, the texture and the weight of the fabric were expressed with light games on the fabric. Strange human faces, non-natural animal forms and patterns similar to grass were given in the scattered form.

There were several objects on the table. One of these objects had compasses, a tool for measuring the distance on the map and for drawing circles. The astrolabe, an Arabic-based instrument used to measure the distance from the planet and the stars, stood on the table. There was an open book in front of the astronomer. There was a circular figure on the left page of the book that was open, there was a text on the right page of the book. There was a deep rectangular cupboard in the corner of the wall and books on the cupboard. Vermeer was adding a "table" into his many paintings. He often applied this understanding in this painting. Here, the painting "Moses Rescued from the Sea" adorned the wall behind the painting.