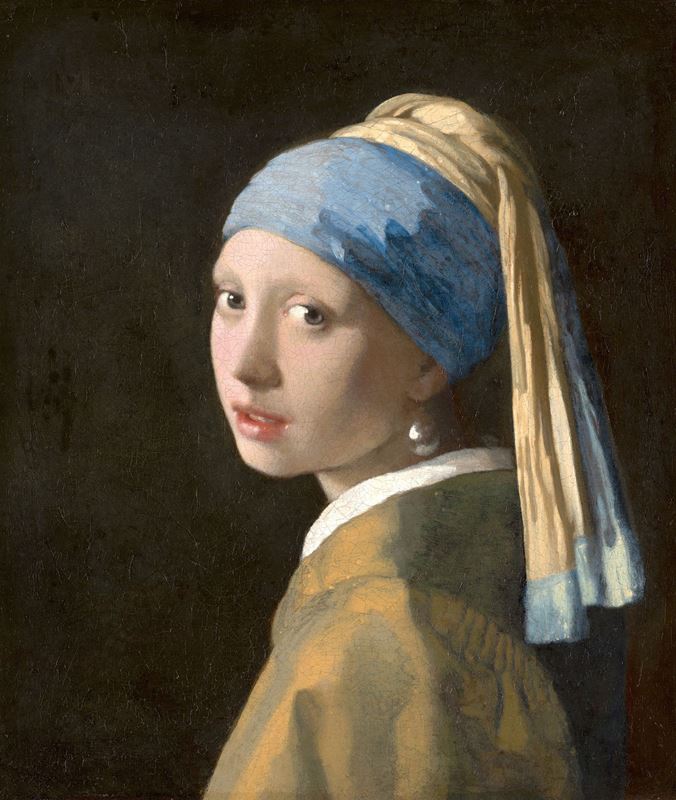 Vermeer's "Girl with Pearl Earrings" is one of the most famous portraits. The painting had been left to the forgotten by the death of Vermeer (1675) until half of the 19th century. After more than two hundred years, it was rediscovered by a collector. it was also a source of inspiration for a famous book and film.

The girl's name in the picture was unknown and assumptions were made about her identity. It was supposed to be Vermeer's daughter or maid. But Maria, Vermeer's eldest daughter, was 11 years old, and the model in the painting was larger. Her identity could not be removed from her dress. The silk scarf and pearl earrings were just fancy accessories of the girl. The girl's father, or her husband, could have been rich since she had this earring. Vermeer skillfully depicted her vivid expression and exotic attire. She wanted to study her dress and expression rather than do her portrait. Such works were known as "tronies" in the Netherlands and were quite popular.

In the composition, the young girl wearing a pearl earring was only seen from her natural pose which she turned over her shoulder. Her lips were split and depicted as if she were about to talk with a question. Vermeer used the yellow and blue colors on a dark background to draw attention to her beauty. Her face framed with a dark background. The white on the girl's collar, the attention was concentrated on the girl. Vermeer made the background of the original picture dark green. The picture had become get black in time and dark background. The painter didn't give any exaggeration in the girl's costume or didn't she take care of her hair. Her hair was hidden under a silk scarf. The silk scarf was of the ultramarine color, a dye obtained by crushing the lapis lazuli stone. There was one big pearl earring in his ear and some of the earring he was wearing disappeared in the shade. Vermeer used the pearl as a symbol of purity.

Vermeer created the general atmosphere of the painting with the light-shadow technique. The face of the girl with the flat dark background and the inclined falling light caused the audience's attention. In contrast to the radiant emphasis of the eyes and lips, which provide the vitality of the picture, the outline of the nose almost melted in the light. He description the glitter of the pearl earring in the girl's ear, described by Vermeer, with a thick pile of white paint.

The picture looks smooth and vibrant and almost looked like a photograph. Vermeer applied brush traces invisibly. He also received help from camera obscura (the dark box), one of the first types of cameras for drawing. This instrument was able to project the external object through a tube and a convex lens onto a wall or canvas-like surface. The artist was copying this projected image. Thanks to this tool, a photographic perspective was obtained. The presence of soft outlines and bright light spots in an image created using a dark box could be seen in this picture.

Products designed for "Girl with a Pearl Earring”