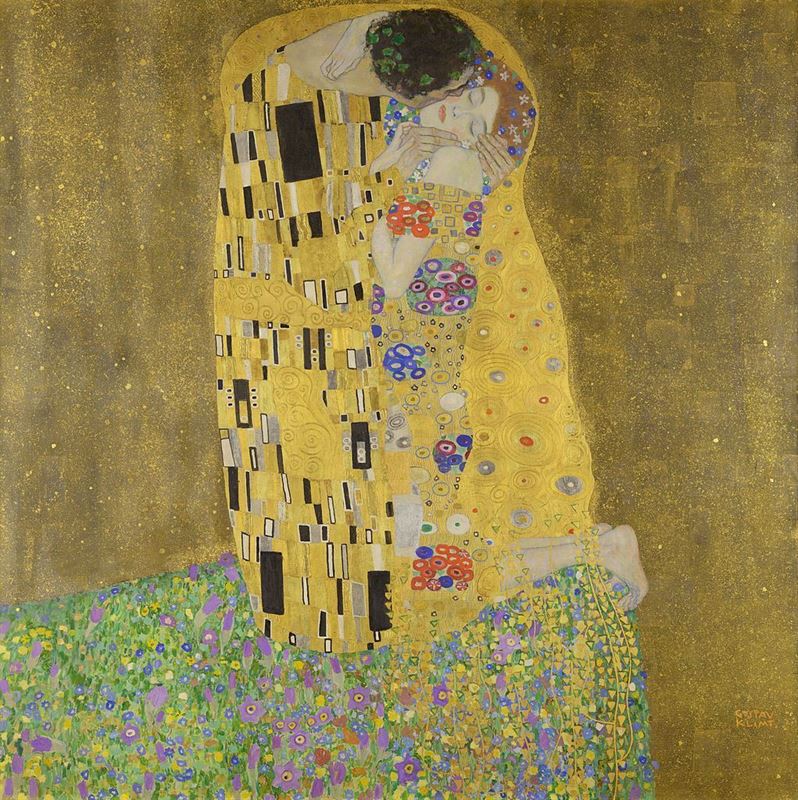 Being one of the most popular paintings of Gustav Klimt from 1907-08, "The Kiss" is also considered as the most successful work of the artist. This painting represents the culmination of the period in which Klimt's in the "golden period". In this period, "gold assets" are used extensively in the tables. Klimt described in the picture a man hugging a woman and kissing her. In this illustration, he made an illustration of the theme of the embracing of the people seen in his previous works. His work on the Beethoven frieze for the Beethoven exhibition in Vienna in 1902, entitled "Praise for Joy," was an example. Here he had drawn a pair of naked, wrapped around each other, symbolizing the hug that embraced the whole world. In 1904, Klimt painted a series of murals adorning the dining room of the Stoclet Villa in Brussels. The painter depicted two people wrapped in each other on the mural. This painting symbolized the "reunion". The same motif soon emerged in the "The Kiss" table as an even more obvious indication of the reconciliation and unity between the two genres in an improved form.

In Klimt's depictions of people who embraced each other, while the face of the man was not shown, all the emphasis was made on the woman. Women were Klimt's favorite subjects. Men's faces were usually covered or hidden. In this picture, a man leaned on a woman, pressed his lips to his cheek, and his face was turned away from the viewer. The woman, whose head was bent at an unnatural angle, was depicted as ecstatic in the man's arms.

Klimt emphasized the painting surface by reminiscent of the Byzantine mosaics. In his design, he used both geometric shapes and abstract decorative shapes with floral patterns. It was seen that the couple in the picture was left out of the woman's feet with only the head and hands. They kneeled in a balanced manner on a ground covered with flowers. The background was quite plain and empty. The lack of a distinctive decor led to the impression that the painting might have come from any time and place. Klimt was thus brought a cosmic dimension of love as if it were possible only beyond the real world. There was an ivy crown at the beginning of the man, and the woman had flowers in her hair. There were golden clothes on the couple and the contrasting patterns in their clothes attracted attention. The man's clothing was decorated with angular shapes and black and white rectangles. The woman's garment was wrapped with bright colored rounded with items to create a contrast. Klimt's formal choices evoked the differences between men and women. Although the different patterns define the bodies of the figures, these patterns overlapped and symbolized their togetherness. At the same time, the yellow strips pouring out of the woman's feet and the flower bundle covering the lower right part of the table are associated with the woman's garment, but the possibility of them being stylized hair curls.

In the picture, which was full of uncertainties, they were seen that at first glance, the man built his physical superiority. However, the woman was on the knees and the equality of the height of the male standing was also interpreted as the female is longer than the male.

While Klimt was a peremptory woman in his previous works, it was an innovation in his painting that he was a submissive woman in "Kiss". This time was the dominant man and he had the initiative of kissing. The models depicted in the picture were thought to be Klimt himself and Emilie Flöge. Emilie Flöge was a comrades friend to Klimt from 1891 to his death.

Klimt had used a gold powder coating technique to create a shiny background in "Kiss". He applied shiny gold foil to the clothes of the figures and made decorative spirals and folds on gold. Klimt, who started his acquaintance with Gold in his father's jewelry shop, was also interested in the rich gold mosaics. At the age of 14, he learned this technique at the School of Applied Arts in Vienna. Klimt developed this technique in 1903 when he saw it in Byzantine mosaics on a trip to Ravenna, Italy.

"The Kiss" had eliminated the question marks that led to the ambiguities and controversies about the art of Klimt and gained great success. "The Kiss", which was shown in 1908 at the "Art Show" (Kunstschau) exhibition, was considered a masterpiece despite the negative criticism of the exhibition.

Products designed for "The Kiss"