In 1897, Gustav Klimt with a group of young artists starts the Sezession "Separatism" movement in Vienna. Klimt is a founding member of the "separatism" movement and as well as elected president of the Session. The group needed a suitable exhibition center in order to fully realize their ideals. This need is solved under the leadership of architect Joseph Maria Olbrich, one of the founders of separatism.

Gustav Klimt and his friends from 1898 to 1905 in the Sezession Building exhibit their work of the "Palace of Sezession". 1902 becomes an important year for the group. They decide to turn their fourteenth exhibition into a special art event, into a holistic experience of art. The most ambitious designs, the "Beethoven exhibition", are organized.

The exhibition was opened in honor of Max Klinger. Max Klinger's only work, the German composer Beethoven, showing the sculpture is the most important part of the exhibition. Klimt and his friends work by putting forth works that will frame Klinger's masterpiece.

The exhibition when been a full Beethoven festival. The music director of the Vienna Opera starts with the fourth episode of Beethoven's Ninth Symphony under Gustav Mahler.

Klimt, Beethoven Frieze participated in the exhibition. For the Beethoven Frieze, Klimt was inspired by the last chapter of Beethoven's Ninth Symphony, Ode to Joy. Beethoven made more than two hundred essays for Friedrich Schiller's "Ode to Joy" poem. He added his last work to the end of his ninth symphony in 1824.

Klimt designed the frieze only for the exhibition. For this purpose, it is made directly on the wall with light materials that are easy to remove. In 1986, it was kept closed until it opened again. The paintings extending as the ornamental belt along the upper half of the wall in the hall were constructed to cover three walls consisting of two long short walls. The frieze describes the struggle of mankind against the forces of evil, which resulted in absolute happiness in the kingdom of poetry and art. He finds "Enemy Forces" in front of "Desire of Happiness", but he reaches a happy ending with "Ode to Joy".

The Desire for Happiness:

It is located on the first long wall opposite the left of the entrance. In the wall painting; "Painful Humanity" draws on, well-armed "Powerful and Armed" depicts the prayers to fight for the sake of happiness. Also, passion and mercy are also depicted in the same direction. 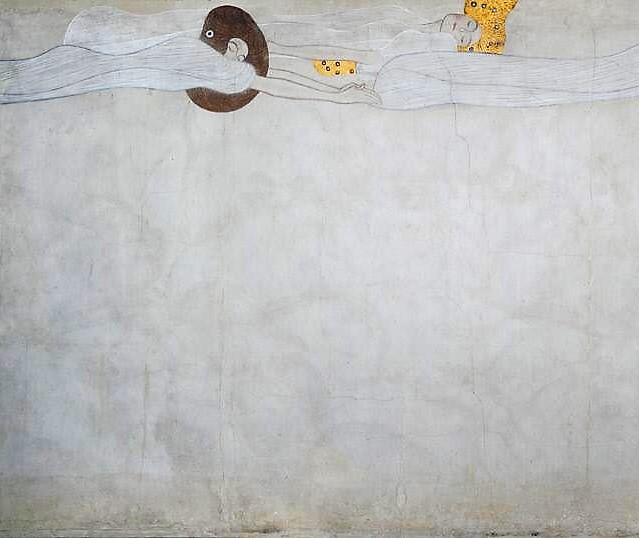 Floating Fairies; The figures are on the top of the illustrated hall. The color of the clothing and skin and the color of the space can be distinguished by contour lines. Gold gilding and decorative elements are used in her hair. The rippling figures in the lean form are balanced by a rhythmic course in the space. These figures come from the first wall to the last wall as a common element that integrates the scenes alone. These fairies, which form a very long chain, are an allegory of a passion for happiness. 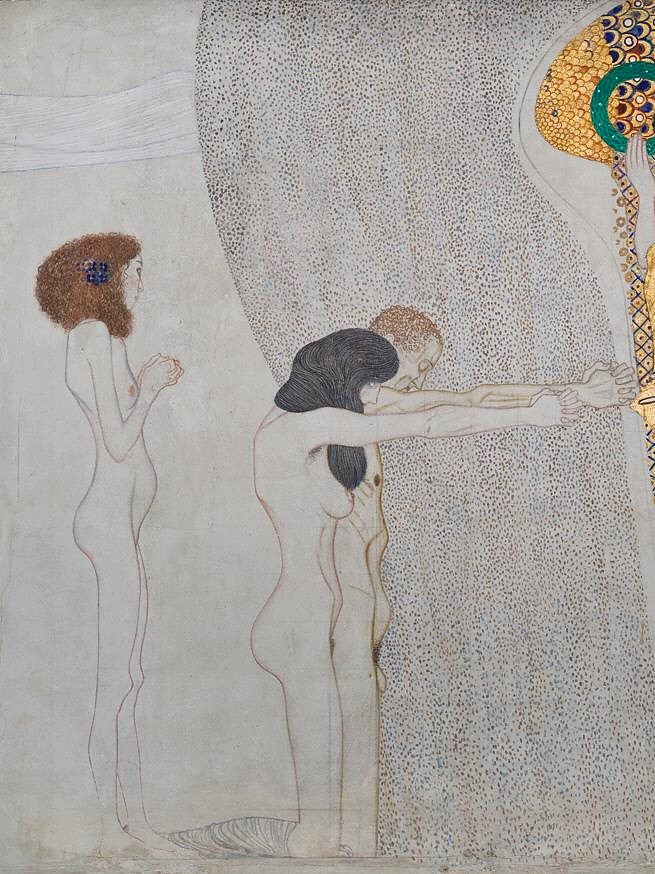 Painful Humanity; The scene is shown with a kneeling couple and a girl standing behind them. Here, he turned his kneeling double prayer and hope into his dazzling heroes. The suffering human is depicted. The nakedness and pale color of the figures are again separated from the color of the space by using the contour line. The male and female figure, kneeled at the front, hands their hands forward and pleads for the well-armed, powerful knight they see as their savior, to fight to reach happiness. These figures symbolize the external pressure created by the weak human suffering on the knight. 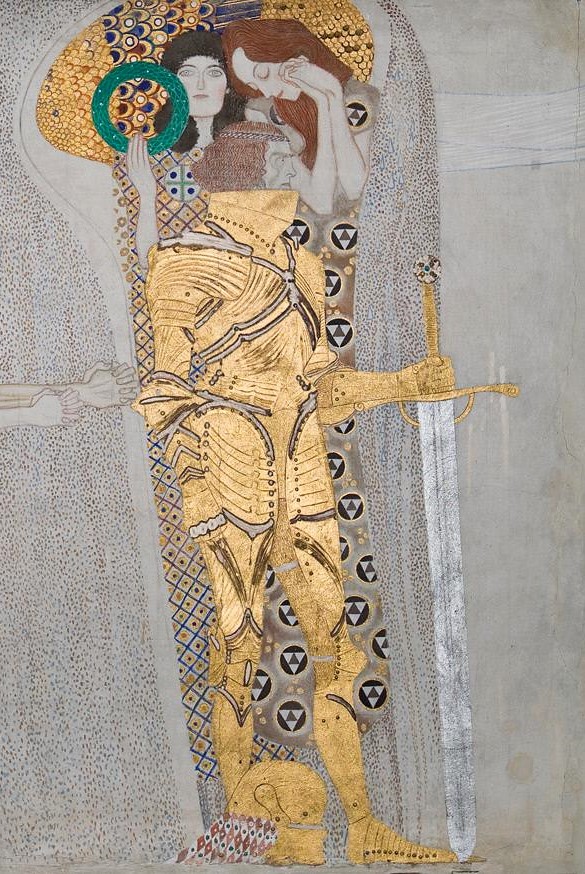 Powerful and Armed; There is a well-armed strong knight standing in front with his sword. The armor of the figure, the sword and the helmet on the ground were heavily gilded. Behind the figure, there are two female figures, one of them gazing at the audience and the other with two hands folded. These two female figures are personalized forms of Passion and Mercy. They symbolize internal repression as a way of expression of the inner motivation that encourages the knight to fight happiness. The common purpose of all these pressures is to direct the well-armed strong to take the effort to reach happiness.

Enemy forces located on the short wall in the middle where the frieze continues; In this scene, filled with color intensity, dark forces that prevent humanity from walking towards happiness are depicted. 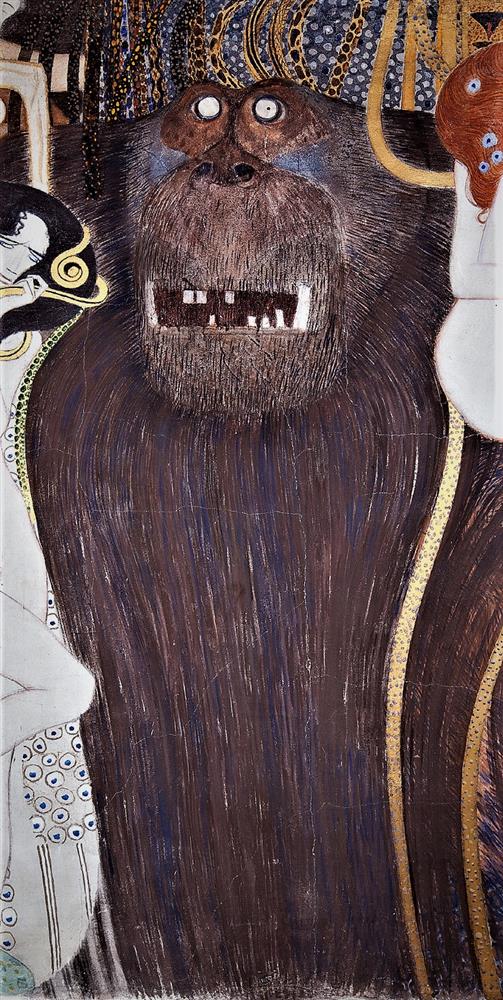 Typhoon; In Greek mythology, Typhon is a monster possessing the evil power the gods are afraid to fight. There is a hundred head of this monster and it gives the flame from the mouth. The giant Typhon, shown as a snake-tailed and winged monkey, is an enemy that even scared the gods. The blue wings and snake-like extensions that continue to the right of the picture contribute to its gigantic appearance. The scene revolves around Typhon, a monster staring at the audience with and eyes. 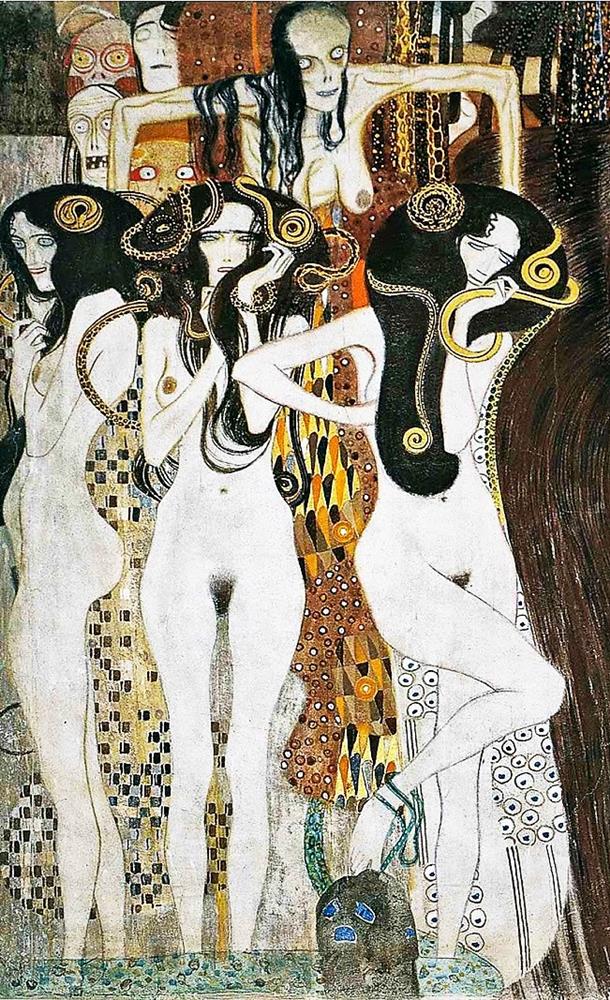 Disease, Madness, and Death with Three Gorgo; To the right of Typhon, Greek mythology depicts the three daughters of Typhon, known as female monsters with snake hair, turning men to stone with their gaze. Three naked female figures stand out with their different postures. Behind these figures are the terrible faces of three evil, sickness, madness and death that are haunting humanity. 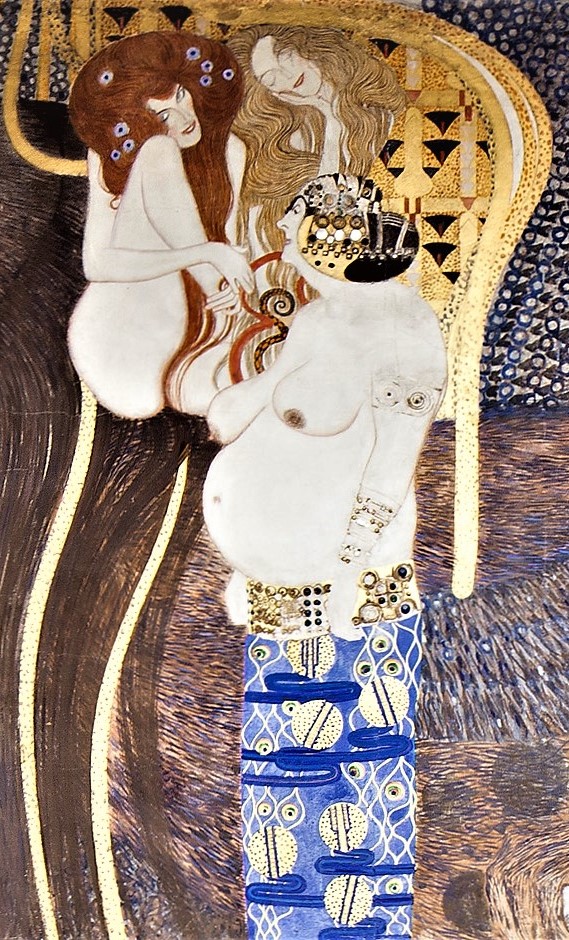 Extremism, Lust, and Immorality; Three female figures on the left of Typhon express extremism, lust and immorality. Extremism is depicted as a woman with a large belly. The figure is shown from the profile and the upper part of the body is depicted naked. The blue skirt is decorated with pearl beads and bronze rings. Right on top of her, there is the theme of lust and immorality. One is portrayed as lustful, while the other is symbolized by a flirtatious look.

Gnawing Boredom; It is located under Typhon's blue wings and snake extensions. She has been shown by its diseased, weak female figure. The woman is in an uncertain oscillation between obscenity and death. In the upper right corner of the frieze is a fairy with only the face between Typhon's snake extensions. The fairy was wriggled away by flying strongly over all evil.

The last part of the frieze is the second longest wall on the right. His passion for happiness reaches serenity in poetry, man is caught by the magic of art and finds love and joy in his pure form.

Poem; The lir is shown by the stealing female figure. On the verge of the garden of Eden, the poem relieves all kinds of trouble with the lyre he stole. The woman who steals lyre will bring happiness. 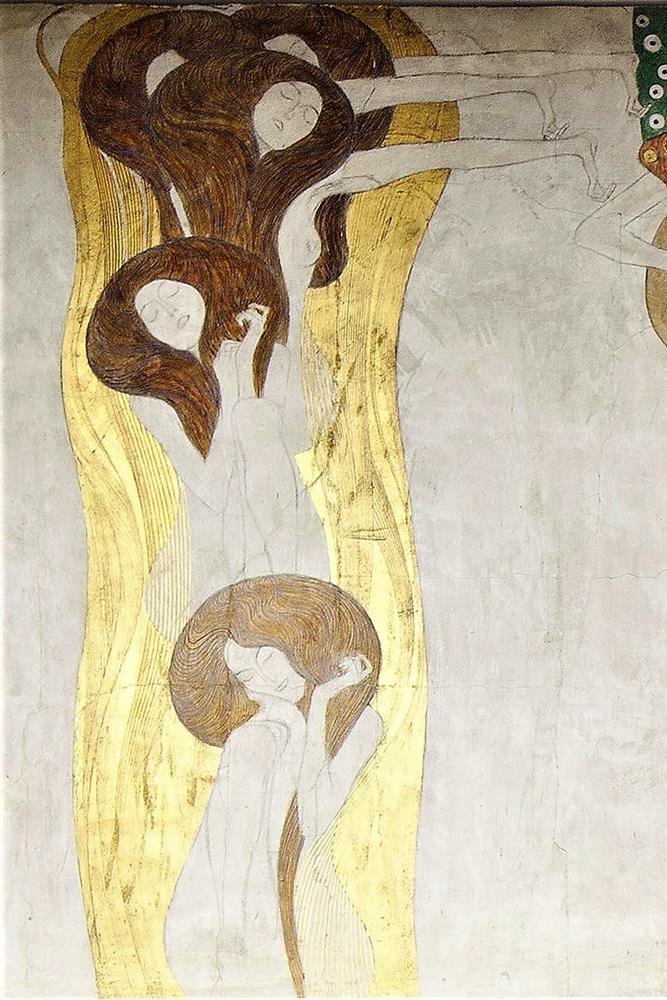 Arts; Five female figures are shown. These women are carried on golden leaves and are guided to the ideal world where there is pure joy, happiness, and love. The top three women point to the angel choir and the Ode to Joy they say. 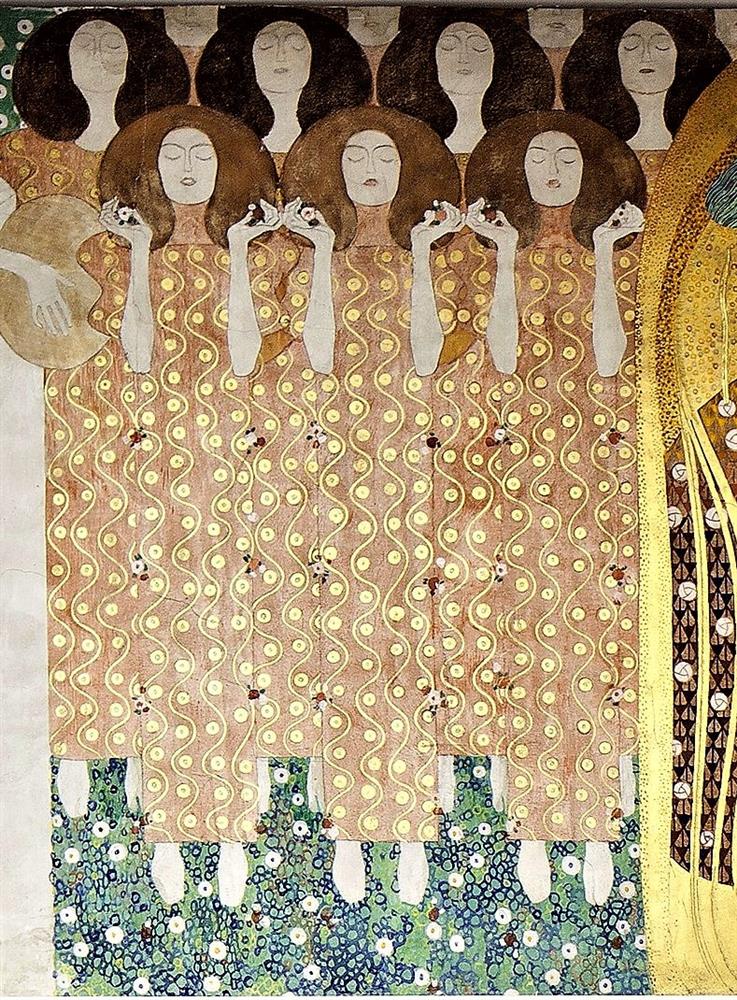 Heaven's Angels Choir; It has formed a rhythmic order by repeating each figure, form, color, and movement in the sequence of the figures. The feet of the figures seem to fly in the air. The last section of Beethoven's Ninth Symphony, Ode to Joy, performs his poem "Heaven's Angels" choir:

“Be embraced, you millions yonder!
Take this kiss throughout the world!”… 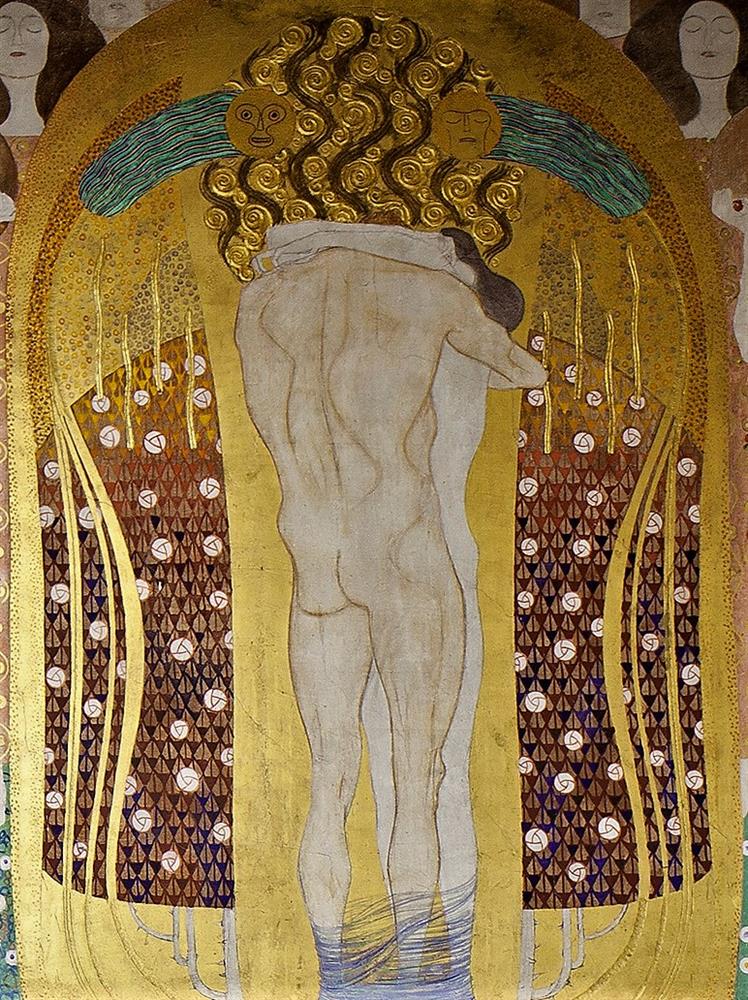 Poetry and Embracing the Strong Knight - Kiss all over the world; It is located in front of the Double Angels Chorus. There are flowers around the couple. They have moon and sun figures on them. The bare and muscular male figure painted from the back is firmly grasped by the woman. The figure of the woman kissed by the man is not fully seen. The well-armed strong knight fought against all evil with the motivation of internal and external pressures. In this last scene, a happy ending was reached with the support of art and poetry and this was reported to the whole world with a kiss.

Klimt's masterpiece "Beethoven Frieze", which was created during the Sezession era, is the transfer of Beethoven's Ninth Symphony to painting. Klimt thus brought together the three branches of art: painting, music, and architecture.