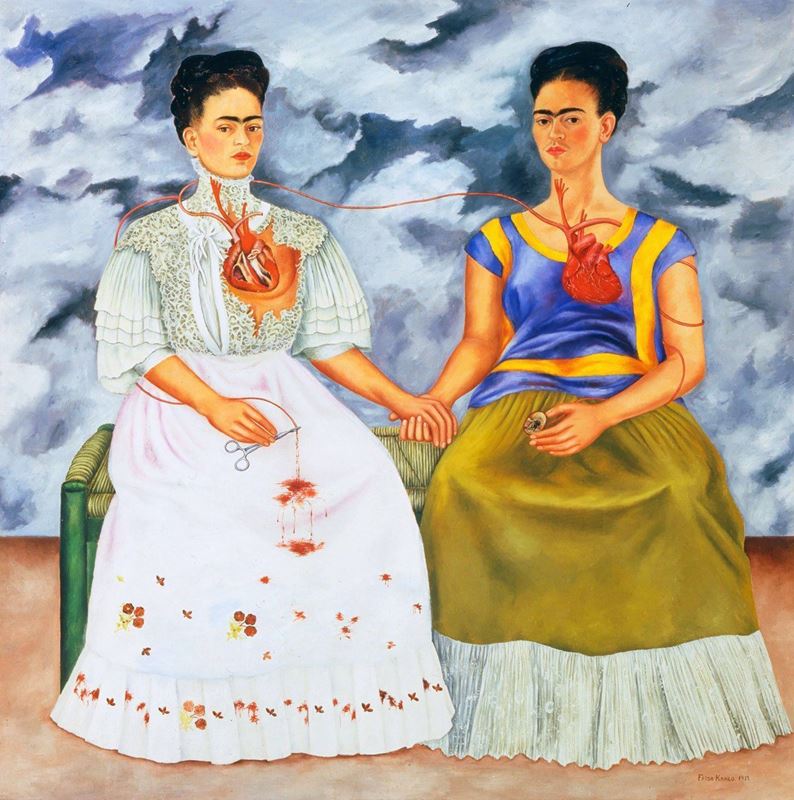 One of Frida Kahlo's most famous paintings, "The Two Fridas", was made in 1939, when Diego Rivera and Frida ended their eleven-year marriage.

In the table there are two Frida sitting side by side on a bench and facing the viewer. One is the unloved Frida, who is divorced from Diego, and the other one is Diego's lover Frida.

Frida on the left is wearing a white dress. On the right, Frida wore the traditional Mexican dress "Tehuana", which she wore after the marriage. Frida's face on the right is dark. One of the two Frida is European and the other in Mexican clothing and they hold hands. This table brings to mind the origin of Frida's semi-European and semi-Mexican Indians.

Both Frida's hearts are outside their bodies. The first Frida's lace vest is torn and the broken heart is clearly visible. The first Frida has a surgical instrument in hand.The other Frida's heart is solid and whole. The other holds in Frida's hand a picture miniature portrait of Diego's childhood. From the red frame of the oval miniature shows, a long, red vein that resembles the umbilical cord that emerges from a placenta. This egg-shaped portrait is both a lost baby and the representation of a lost lover.

The vein circulates around Frida's arm and extends towards her heart. This moves from the gap to the other Frida, wraps her throat, enters the broken heart, and ends up in her lap when he stops the blood with a forceps. Here, the flow of blood stops temporarily. Blood continues to drip and forms a flowing pool to create another blood lake from the white lap. Below, the stains on her skirt reflect the red flower embroidery. Some of the tiny, embroidered flowers have turned into dripping blood stains.

Two Frida were placed in front of a gray-white sky with their emotion-free faces. As seen in its full-length self-portraits, Frida is alone in an eternal, flat, empty space. Frida is far from all the objects except the one on which she sits bench. Frida's two self-portraits, deeper, deepen the coldness of the feeling of loneliness. After being abandoned by Diego, Frida holds her hand and ties her two entities with a blood vein.

At the age of six, Frida had been bedridden and alone for nine months due to her polio. During this time Frida often spent time with a friend she had created in her dream. The moment of reuniting Frida's imaginary friend was described in "The Two Fridas".

In her diary, Frida wrote the following in her diary of the dual autoportra, depicting herself:

"I think I had a friendship with a little girl-peer, who wasn't real to me when I was six. In the window of my room facing "Allende Street" I would steam my breath and draw a "door" over the glass covered with steam...

In my dream, I went through this "door", full of joy and hastily. I went to the milk shop called "Pinzon". I slipped in through Pinzon's "O" and quickly I went down to where I met my imaginary friend. I remember no image of her or her color. But surely she was cheerful, and she would laugh quietly all the time. She was agile and would danced as if she were flying. I'd watch her carefully when he was dancing, and I'd tell her about my problems. Which ones? I do not remember. But she understood everything in my voice. I would return to the window and passed through that "door" that was drawn to the window. When? How long have I been with her? I do not know. It could have been a second, and a thousand years. I was happy. I would wipe the "door" with my hand and she would vanish. In joy, I would hustle and bustle on the porch of my house with my secret. Every time, I'd sit in my own place under the cedar tree and scream and laugh. I would be surprised by my great happiness and my association with the live memory of the little girl. Thirty-four years have passed since this magical friendship. Every time I remember her, my imaginary friend comes to life again and grows as I grow older in my world."