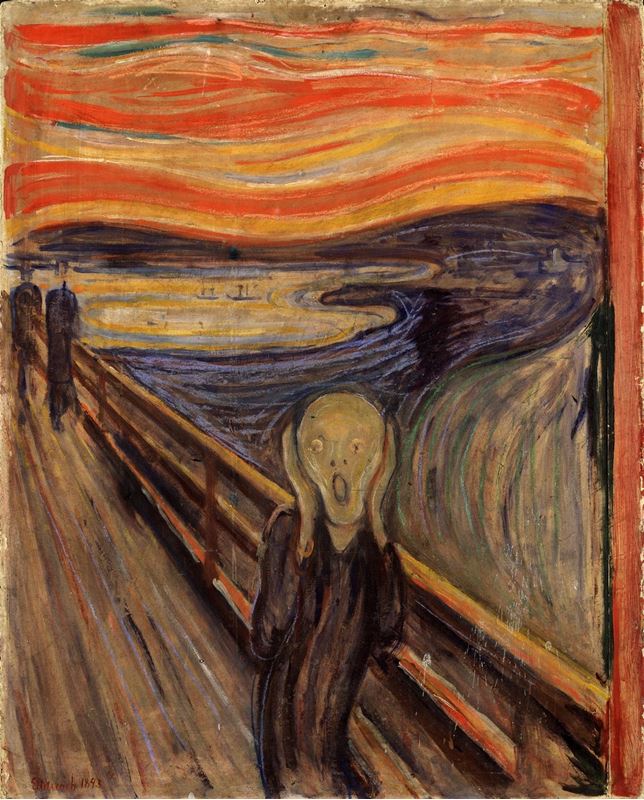 In 1893 Edvard Munch began working on his most famous work, "The Scream". The painting was part of a series called "Life Frieze", whose subject matter was life, love, death and the intense emotions they aroused. Munch worked for years on this series, rearranging each time and adding new paints. As in his other paintings, he made many different versions in this painting. This iconic picture, which has versions made of lithography, oil painting, and tempera technique, became the symbol of anxiety and fear represented in the movement of expressionism in the 19th century.

Although the figure is thought to have taken this name because it looks like the figure screaming, Munch said the name of the painting came from a mysterious scream from the world that covered its surroundings. Several times before this moment he wrote several times about the image of the memory of a march in Christiania (now Oslo): "I was walking down the road with my two friends, the sun went down. Suddenly the sky became blood color and I felt a sad breath. I stopped, I stood on the fence, I was exhausted. The clouds on the fjord were dripping blood. My friends went on the way, but I stood there with an open wound in my chest, shivering. I heard there was an unusual screaming through nature."

Munch lived this experience, in a suburban town north of Oslo. The city's slaughterhouse and the mental hospital where Munch des sister, Laura, was closed, was also present. The painting aimed at explaining how a sudden excitement could change all of our sensory impressions. The screaming figure that Munch had depicted was his mouth open, his hands pressed to his head, his eyes wide-eyed, and his cheeks were drawn in the form of a hollow skull. All the lines were moving towards the focal point of the picture, that is, the screaming head. The bridge tightened the figure to a narrow and uncomfortable area, cutting the scene at a sharp angle. Two unrelated figures were walking on a road to the left, and the ocean to the right. These distant figures contrasted with the screaming figure, making him look more alone and isolated. Strange twisty lines represented the echoes of the frightening sound of Munch. It was as if the whole scene was participating in the pain and excitement of that scream. There was a burning blood-red sky like fire above. This red sky was the color of an artistic invention or sunset that originated from natural conditions. In August 1883, the Krakatoa volcano in Indonesia exploded, and in November there had been red rays of twilight all over Europe. Munch completed his work in 1893, but his diaries indicated that he had been painting on a natural event that had developed in previous years.

Munch's paintings, especially "The Scream“, were the target of thieves. Different versions of "The Scream" were stolen twice from the walls of the museum. The first theft happened on February 1994 at the National Gallery of Norway. The "Scream" Table was found in May and had been returned to the National Gallery. The second robbery incident took place in the Munch Museum in August 2004, and the painting was found in 2006 and brought back to the museum.

The intense and powerful image of the lonely and suffering figure, "The Scream”, continued to be the center of attention in popular culture. "The Scream“ has inspired a lot of works from cartoons to horror movies.

"The Scream" was a horrible expression of existential fear, but his creator, Munch, was a great artist with a sensitive, introverted nature.