The Luncheon on the Grass - Édouard Manet 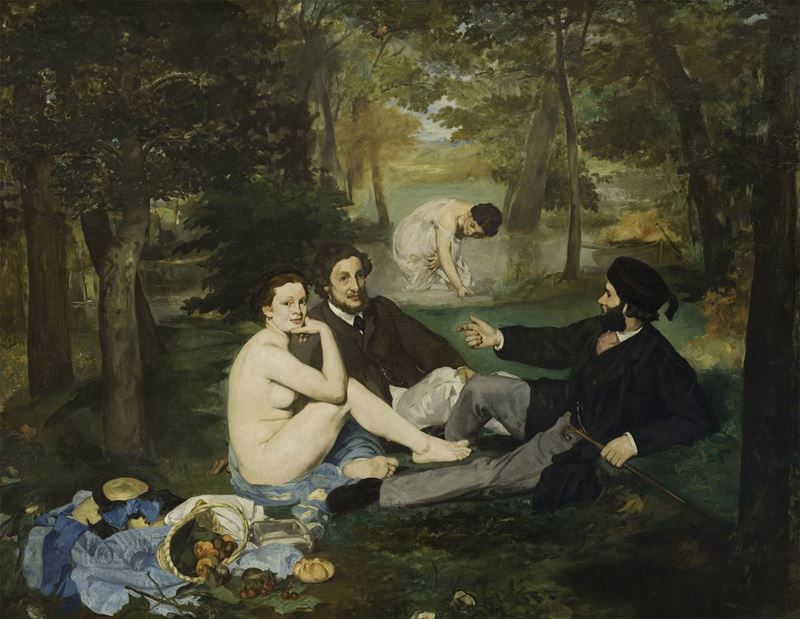 In 1863, Édouard Manet wanted to participate in the Paris famous Salon exhibition with his work "The Luncheon on the Grass" but the painting was rejected by the Salon jury. Only half of the applications were accepted that year. III. Napoleon allowed him to organize another exhibition under the name of "Salon des Refusés" and "The Luncheon on the Grass" was on display here.

Manet's childhood and youth friend Antonin Proust mentioned that the idea of painting emerged outdoors in Argenteuil, Paris. Manet was seated on the banks of the River Seine and watched the people bathing in the river. Then he turns to Proust and said, "Looks like I should make a nude. Yes, I'll make one." Immediately after, He recalled the "Concerto Campestre (Louvre)" painting he had copied at the Louvre and attributed to Giorgione and said: "When I was a student, I copied Giorgione's woman, one of those musicians. This is a rather dark picture. Faded background. I'm going to do this painting again and when I do, I will draw the figures that you see with the permeability of that atmosphere." In the painting "Concerto Campestre (Louvre)" attributed to the famous Renaissance master Giorgione, he depicted people and nudes wearing the dress of a painter's age.  In this image, Manet puts his heroes in modern dresses. At the same time, Giorgione's other picture ”The Tempest" is said to have an effect on this painting. There were similarities in the composition between the two images. Giorgione created a contrast between a clothed male and a half nudes woman in his painting. The picture also included traces were seen of the engraving of "The Judgment of Paris" by Marcantonio Raimondi's copy of Raffaello. This engraving Manet's inspiration clearly showed the three figures.

In this picture, Manet described two men of the city who had a picnic in the openness of the forest, and a naked woman sitting next to the men. Away another half-naked woman was being washed in the creek. The table quickly created a scandal. She was sitting on the grass with two modernly dressed men. Manet's naked female depiction was seen by the audience as contrary to morality. This painting showed the Parisian men in their actual form. This painting shows the Parisian men in their actual form. The two men were not classical dressed in the traditional way. Manet opposed the traditions by portraying real people in a modern world.

The naked woman gazing into the viewer's eyes was the professional model Victorine Meurent, whom Manet met in 1862. Victorine was Manet's favorite model and was the subject of many paintings. In the preparatory work of the paint, while the woman figure hair was a redhead in color and in the last case the woman figure hair was brown in color. Manet used his younger brother Eugene Manet as a model for the male figure on the right. For the male figure in the middle, Ferdinand Leenhoff, the brother of Manet's wife Suzanne Leenhoff, used as a model.

Manet was also a very good still-life painter. The illustration depicts a still life with blue shadows of yellow and red tones in the foreground. In the foreground the picture depicts a still life with blue shades of yellow and red tones. This still life competed with the shades of the figures of the painting. Victorine's clothes were thrown randomly on the lawn. The fruits, bread, and bottles left after the picnic was depicted with this dress. The foreground of the table was bright green, and the background shone with sunlight. The main feature of the painting was the use of vivid colors. Such light effect in the table, the lively greens like this in the table made it feel like the paint was made in the woods. The fact that the keys were freely driven was that the traces of the brush gave the effect of painting in the middle of nature. It was a new feature that Manet included the effect of the sunlight's shining colors on the picture and left the brush strokes intact. These two traits would be a form of work adopted by the Impressionists. Manet didn't work outdoors in this picture. But the table that surprised the impressionists of the future and pushed them to work outdoors had been a "The Luncheon on the Grass".