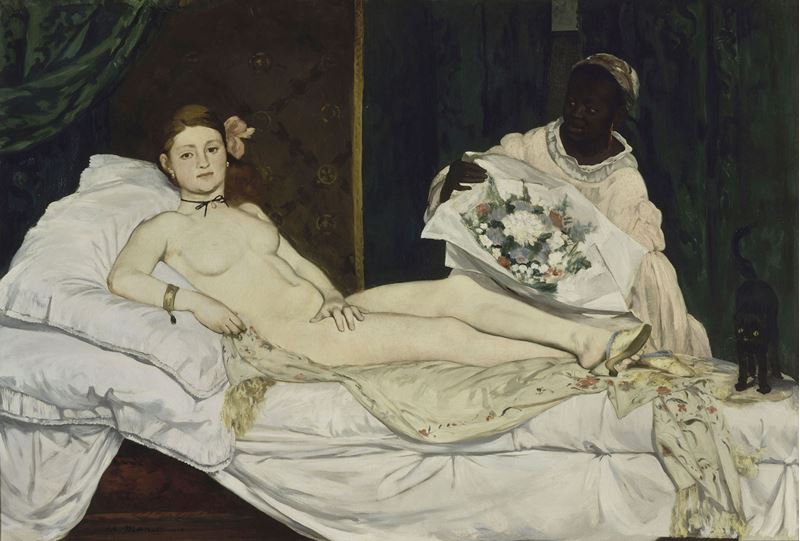 In 1865, Édouard Manet exhibited a great surprise and scandal in the "Olympia" painting on display at the Paris Salon. The table depicts a naked woman stretching to bed. The subject of the painting was previously described by Giorgione, Tiziano, and Goya. But Manet had created Olympia, the ideal of the classics, in a different way than the ideal. Lying on the bed depicted in the picture, the naked woman's neck was tied around a thin velvet ribbon. She wore a bracelet on her wrist, dressed in slippers. So he described Olympia as realistic. Olympia was lying on a white sheet and a satin blanket. Manet had added a black cat to Olympia's foot with a black maid holding a bouquet of flowers on the table. The back of the cat on Olympia's foot was hunched. The woman that Manet drew was quite realistic. Olympia was a modern woman of life who was aware of the strength of her body, daring and self-confident. The Olympia's gaze from out of the table, towards the viewer. She looked into the audience's eyes and somehow incorporated the audience on stage.

Manet made his "Olympia" by Titian's painting of "Venus in Urbino", dated 1538, in the inspired. During his visit to Italy, he saw Titian's work and it was known that he made a copy of this picture. Titian's Venus was a seductive woman, seductively looking at the viewer. But according to Olympia, she was rather shy. Unlike Olympia, there was a dog lying at the foot of the Venus of Titan. Titan described this dog as deep sleep. Manet's woman had a revolt. The painter had destroyed the image of the ideal woman in traditional works.

The naked female model in the painting was Victorine Meurent, where Manet met in 1862. Victorine was Manet's favorite model and the subject of many paintings. Manet, "Olympia" in his work Victorine's facial features and red hair showed clearly. In the last painting, the artist painted Victorine's hair dark brown. Although her hair was darkened, it was obvious that the model in the picture was Victorine.

There were many comments about who Olympia was or the source of she is named. He was one of those comments that came from a poem by writer, critic, painter and sculptor Zacharie Astruc, who was one of the close friends of Manet, for Olympia's name. In a poem by Zacharie Astruc: “When tired of dreaming, Olympia awakens / Spring enters on the arms of the mild black messenger / She is the slave who, like the amorous night / Comes to adorn with flowers the day beautiful to behold / The august young woman is whom ardor is ever wakeful.” wrote the strings.

There were also criticisms about the technique of painting. Manet, the colors used in the table; white, black, red and green on the canvas with the effect of flattening, no modle had been criticized for not working on the work. Manet did not use the traditional modle technique, and the method used color at its core. The volume and shape of the figure were determined by sharp contours and subtle color nuances.