A Bar at the Folies-Bergère - Édouard Manet 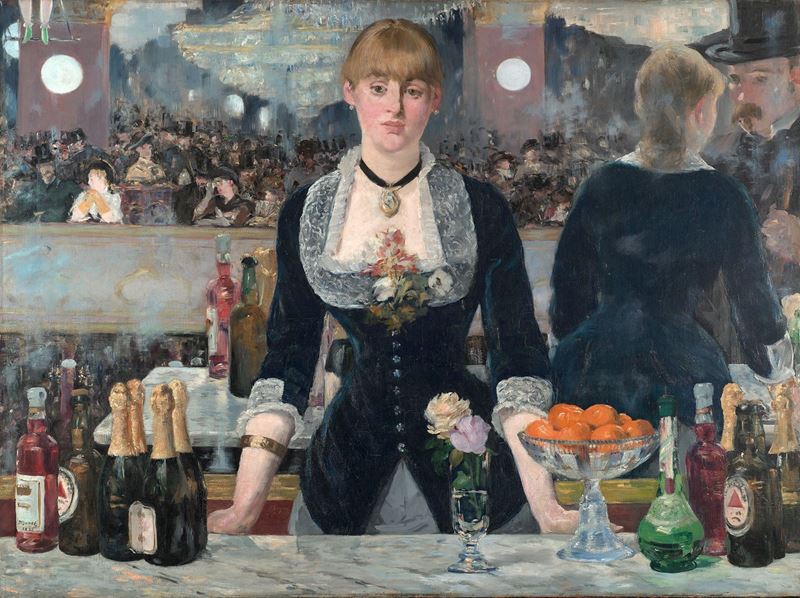 One of the most famous paintings of Édouard Manet "A Bar at the Folies-Bergère" was his last masterpiece one year before his death. The first manifestations of the disease that led to the death of Manet were revealed in 1880. But he did not stop the disease from working and completed this last great work to be given to the Paris Salon.

The table offered a look at a busy bar in 19th century Paris. Folies Bergère, the famous entertainment venue of Paris, became a popular venue in the early 1880s. It was a fun place where people could have a drink, but also a show of musicians, dancers, and circus people. In addition to those who came for the stage performances, they also had customers from high society and different classes. Manet had made drafts that would be the basis for the workshop paintings in these and similar bars. Suzon was a barmaid with a golden bang and pale pink face, working in Folies Bergère. She modeled at the Manet workshop in his bar outfit.

In the center of the painting, Suzon stood against the dining area, which was reflected in the mirror and the viewer found herself. She rested on a marble bar with his hands, creating a pyramidal movement and encompassing the materials in the bar. Manet, a talented still-life painter, adorned the marble bar with still life. The arrangement included champagne bottles wrapped in golden-yellow foils, with bottles of wine, red liqueur bottles and ordinary glass bottles with a green carafe. Manet had placed two yellow and one pink rose inside the vase with a crystal bowl of mandarins. The colors of bottles, mandarines, and roses were found on the girl's dress, face and hair. He also signed the name of Manet on the label of the red bottle on the bar.

Behind the bar, there was a large mirror with a gold frame. In order to distinguish the reflection, some uncertainties and fuzzy images were displayed on the mirror surface. Most of the stage was arranged to be watched in the mirror. Folies Bergèrems balcony and customers were pictured here. The horizontal-planar bar matched the middle-level balcony. The crowd of the dining room, which was illuminated by huge crystal chandeliers with acrobatic entertainment were seen with the help of this mirror.

Manet had placed his friends on the canvas as in his previous paintings. Among the crowd on the balcony, Manet's friend Méry Laurent leaned on a handrail, watching the surroundings. The women in the crowd, the light clothes, were prominent among men's black clothing. The behind figures were smashed with quick and free brush strokes to make the crowd feel. In the upper left corner, the legs of an acrobat wearing fine green trapeze shoes, unfinished because of the edge of the painting, were visible. In the upper right corner, the girl's back, a man in a cylinder hat and his walking stick on the left hand were reflected in the mirror. Even though the man was looking at the barmaid, the barmaid's eyes were directed to the other side. The barmaid looked a sad, distressed or pensive on as if her face. The bartender was gently looking downwards and looking towards the left side of the viewer. She was as if stuck between the audience on one side and between the crowd and his male customer on the other side. Manet has integrated the scene from one end to the other the marble of the bar, barmaid girl with lace collar implying gray, which hinted the gray, from chandeliers, the remote-visible axis of the crowd, and the misty, smoky reflection of the scene with pale gray.

The painting "A Bar at the Folies-Bergère" and the reflection on the mirror, in particular, made the art critics think for years. It was seen that Suzon and some bottles did not match their reflections. There were no reflections on the mirror bottles on the left side. The man in the cylinder hat was another riddle. The bar was true to the audience, but the angle of reflection was completely different. This guy wasn't on the side of the bar towards the viewer. The reflection on the mirror showed the man in front of Suzon, where the spectator should be. Thus, the viewer became a 19th-century gentleman and involved in the scene.