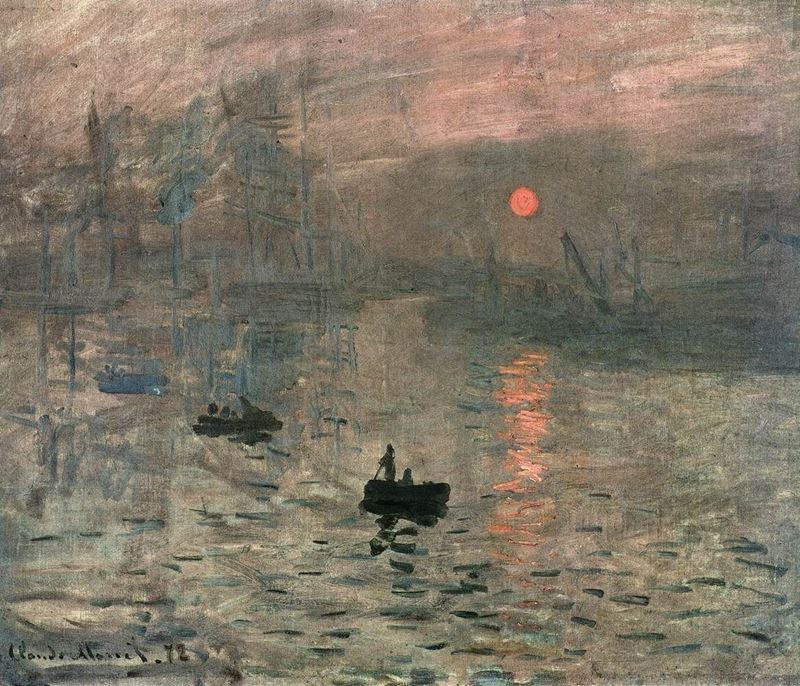 As can be seen in "Impression, Sunrise“, the point of departure of impressionism was light. The port of Le Havre on the Normandy coast seemed to be covered in the morning mist. The sun was rising on the sea. In the background, the steaming chimneys with the masts of the ships were vaguely noticeable in the fog. Monet applied the thinned paint with light brush touches to describe the morning impressions. Monet's palette was almost focused on the blue and orange relationship that complemented each other. Orange tones were used for reflection in the sun and water. Blue and gray-blue tones were used in the sky. Monet was interested in the changing nature of light rather than pictorial content. The painting was not telling the scene but the moment. The painter sometimes applied colors with intense brush strokes ...In almost all of his works, Monet tried to describe the shadows in the water and the reflections of light. Monet, caught the moment when the sun began to shine orange. He tried to create the effect that the orange sun lights reflected in the light wavy water quickly change color.

The narrative style in this table was brand new. Reducing the color, the expression of everything with only two opposite colors (blue and orange), the ambiguity of the borderlines and the revival of vibrations in the air gap by brush strokes were the new technical elements. "Impression, Sunrise" The capture of a moment with the flare of the sun through the fog over the port of Le Havre in Normandy was the proof of a formal innovative conception. Monet's work was not only by name but by his character and his style as an ideal illustration of the impressionist painting.