The Persistence of Memory - Salvador Dali 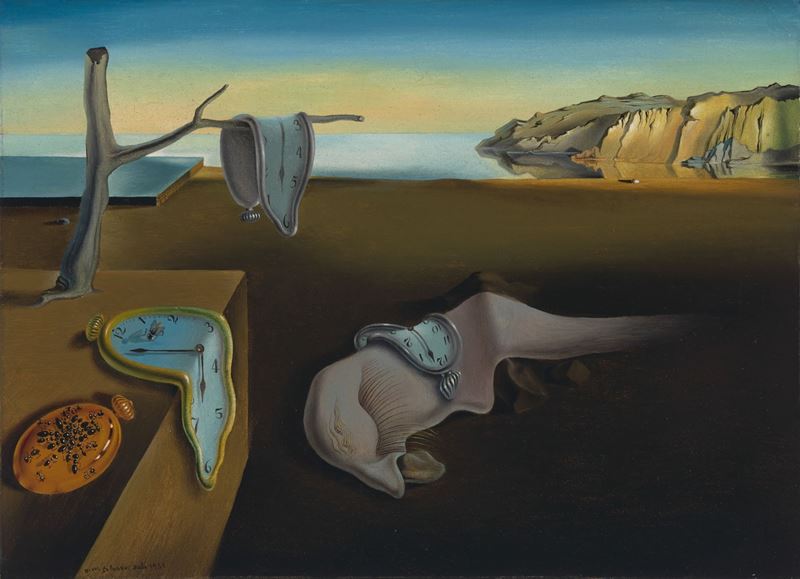 Salvador Dali, who met the Parisian surrealists in 1928, joined them in 1929. He soon became the most famous figure of surrealism. Like other Surrealists, Dali was a devoted follower of Sigmund Freud, author of The Interpretation of Dreams, in which subconscious theories were analyzed. He became an icon with his distorted figured paintings. In his painting The Persistence of Memory, dated 1931, he depicted melted and softened pocket watches standing like faded flowers on a deserted beach. This painting became one of Dali's most famous paintings. When it was first exhibited at the Julien Levy Gallery in Madison Square, New York in 1932, it was met with great interest. This was Dali's first exhibition in the USA, where he would continue his life until the years of World War II.

Dali reflected his childhood landscapes in his paintings. He has used the details of Catalonian landscapes in his works for years. In "The Persistence of Memory", the shores of Catalonia, where golden seasons were born, formed the backdrop of the scene in the background. In the center of the picture was a head with long eyelashes, visible from the side and deformed. This strange figure was said to be Dali's own profile. Eyelashes resembled a big closed eye, thinking or sleeping. Dali implied that our consciousness will be liberated only if we break free from the limits imposed by earthly time.

The three softened pocket watch dials in the foreground hung loosely as if they were molten. On the strange figure in the center was a pocket watch that melted as if it were its cover. There was another molten clock on the edge of the earth-colored pedestal to the left of the figure. Another melted clock hung from a single branch of a dried tree at the back edge of the pedestal. n front of the pedestal was the hard clock with ants on its orange cover. This hard clock was creating the opposite with soft clocks. In the middle of this pocket watch was a cluster of ants. Apart from these ants and the fly on the light blue dial of the melted clock on the edge of the earth-colored base, there was no other living creature in the composition. Dali used ants as a symbol of decay in many of his works, including the movie The Andalusian Dog.

Each clock in the chart showed a different time. Because in Dali's world, linear and smooth time did not matter. Hours dissolve, and those that did not melt and remained intact were covered with ants, the symbol of decay, or death. It was the meaninglessness of time portrayed with these clocks.

Dali was interested in science from the 1930s. This interest was naturally reflected in all of his paintings. He was influenced by Albert Einstein and especially by his space-time-oriented theory of relativity. “The Perseverance of Memory” was the first important example in this regard. The fluid clocks in this work, one of Dali's most famous Surrealist works, symbolized Salvador Dali's Surrealism. It was also an expression of the Catalan heritage in Dali. Hills and ants from his childhood occupied a large place in the painting. Soft Watches, the symbol of Dali and his works, was not only one of his masterpieces but also one of the most memorable paintings of the twentieth century.